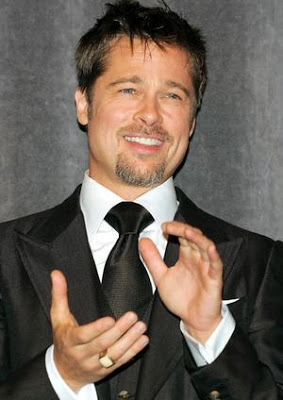 Film star Brad Pitt has donated more than $100,000 to oppose a California referendum seeking to ban gay marriages. Photo by AP.
Combatants in the fight have contributed millions of dollars to prepare for an all-out confrontation
September 16, 2008

The stakes of the ballot drive to forbid same-sex marriage reach far beyond California’s geographic and political borders in what has emerged as another chapter in America’s culture wars.

Christian groups, wealthy benefactors and self-styled pro-family groups from all over the US are watching closely – and weighing in with money. Gay-rights groups and wealthy individuals are countering with their own cash from across the country.

In the past eight weeks, combatants in the battle of California’s Proposition 8 have poured in more than $20m (£11.3m) to gear up for an all-out confrontation about whether the US will begin to move toward tolerance of same-sex marriages – or to preserve traditional views of marriage.

“It’s a defining issue for this state and the country,” said Brian Brown, executive director for the National Organisation for Marriage, a New Jersey-based Mormon group with a branch in California, which has contributed nearly $1m to the Yes on 8 campaign.

The outcome of the battle, he said, “will affect what our children will be taught about marriage, and it will affect our religious liberties”.

Opponents say the campaign to defeat the ballot measure is a fight for gay rights around the country.

“I really think this is our Gettysburg,” said Kathy Levinson, a Silicon Valley philanthropist and gay-rights activist who pledged this month to match $100,000 in donations to the No on 8 campaign.

“If Proposition 8 passes, we’d lose a generation of time. If we as a perceived liberal and tolerant state lose this battle, many smaller states will feel permission to say ‘not yet’. If it fails, it’s a statement that says the country has changed, that full acceptance of gay and lesbian citizens has come and it would be perceived as a watershed moment.”

Thousands of Californians have contributed to the Yes on 8 campaign, according to campaign finance statements on the secretary of state’s website.

But the big money has come from out-of-state groups such as Connecticut-based Knights of Columbus ($1.3m), a Catholic men’s organisation; the National Organisation for Marriage ($921,000); Mississippi-based American Family Association ($500,000); and Colorado-based Focus on the Family ($414,000), whose chairman is James Dobson, the evangelical Christian whose syndicated radio show is heard by millions.

Wealthy and well-connected individuals have pitched in. Elsa Prince, the matriarch of a powerful Michigan Republican family, donated $250,000 to the Yes on 8 campaign.

She’s the mother of Eric Prince, the co-founder of Blackwater Worldwide – the controversial private military and security contractor – and of Betsy DeVos, the Republican activist whose family has contributed millions to conservative causes.

Opponents have their heavy hitters, too, including the Republican governor of California, Arnold Schwarzenegger, who hasn’t contributed to the campaign but has voiced his opposition to the initiative.

The top contributor to the No on 8 campaign, Equality California ($3.6m), is its sponsor. Others include Washington, DC-based Human Rights Campaign ($2.3m); Robert Wilson, a New York philanthropist ($1.2m); and Bruce Bastian, a gay Mormon from Utah and the co-founder of WordPerfect ($1m).

Twenty-seven states have constitutional amendments outlawing same-sex marriages – 11 approved by voters in 2004, when the issue became a central part of George Bush’s re-election, and seven more in 2006.

Three more states – California, Arizona and Florida – have the issue on November’s ballot. Massachusetts and California are the only states that recognise same-sex marriages.

Conservative and evangelical groups were freshly mobilised by the California supreme court’s decision in May to overrule voters’ approval of a ban on same-sex marriages in 2000.

But the movement has its roots in the culture wars of the 1980s and 1990s, says University of California-Berkeley sociology professor Michael Hout.

“They got as far as they could on abortion and have embraced marriage laws as the next step in their agenda,” said Hout, co-author of The Truth About Conservative Christians: What They Think and What They Believe. “Their main agenda remains the reversal of Roe v Wade, but they’re trying to gain new allies who look askance at gay marriage.”

Not that it’s a purely Machiavellian manoeuvre. Proponents of bans on same-sex marriage are “truly concerned that the state should not be licensing immoral behaviour”, Hout said.

“In their interpretation of the Bible, they see a prohibition on homosexual activity. Gay marriage condones a lifestyle that’s ruled out by their reading of the scripture.”

A key feature of the state supreme court decision, say Yes on 8 forces, is that there is no residency requirement.

“Same-sex couples are flying in, getting married, and flying out,” said Bruce Hausknect, judicial analyst for Focus on the Family.

“What happens in states that don’t recognise same-sex marriage when there are custody disputes? It’s part of their agenda to wear down other states. If they can create enough problems, they’re hoping they’ll force courts to take their cases, which could lead to overturning the laws.

“It’s a subtle way,” he said, “of forcing the same-sex agenda on unwilling states by exporting the problems to states that don’t have same-sex protections.”

The dire warnings are “scare tactics” of rightwingers feeding off myths and fears of the people, says Geoffrey Kors, executive director for Equality California.

“That’s fundraising language, language to get their base motivated,” Kors said. “The only gay agenda is about not being treated differently than others.”