Palestinian Travel to US: Can You Say Hypocrisy? 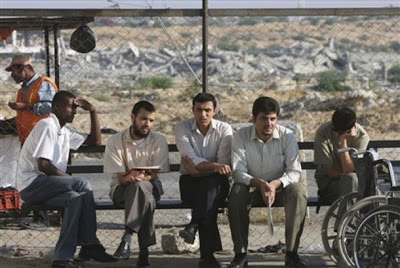 Palestinian Fulbright scholars Zuhair Abu Shaaban, 24, second from right, Osama Daoud, 25, third from right, and Fidaa Abed 23, fourth from right, wait to cross the Erez Border crossing between Israel and Gaza Strip in order to meet U.S. consular officials at the Israeli side of the border, Thursday, July 10, 2008. U.S. consular officials have traveled to the Gaza border to process the visa applications of three Palestinian Fulbright scholars whose scholarships were at risk because of Israeli travel restrictions.
Blocking a Gazan’s Path to San Diego
By Fidaa Abed / August 16, 2008

As a young Palestinian from Gaza, I had been eagerly anticipating the opportunity to study at the University of California San Diego on a Fulbright scholarship. The chance to escape Gaza’s confines and immerse myself in an American education was deeply thrilling. With Israel controlling Gaza’s border exits, air space and sea access — notwithstanding its “pullout” of 2005 — I imagined the long, open roads of the United States and its people’s unchallenged freedom of movement.

I love my people and my homeland, but a young person needs opportunities. These are far more abundant in the United States than in the besieged Gaza Strip.

Last week, I landed in Washington, D.C., brimming with optimism. Upon arrival, I was whisked into a separate room. An American official informed me that he had just received information about me that he could not reveal. However, it required him to put me on the next plane home. I was shocked. And I was taken aback at the cruelty of snatching away my educational dreams at the last possible moment.

My mistreatment was particularly unexpected because in late May, when Secretary of State Condoleezza Rice learned that I and six other Fulbright students were being stripped of our Fulbright scholarships, she leapt to our assistance. One by one, Israel let other Palestinians Fulbright scholars out of Gaza, and they made their way to American universities. Then I was mysteriously singled out for last-minute denial based on “secret evidence.” Two others had their visas canceled on account of secret evidence before they could even leave Gaza.

William J. Fulbright was the only U.S. senator to vote against funding for Sen. Joseph McCarthy’s Un-American Activities Committee. It is ironic, then, that my remarkable educational opportunity is being stripped from me on the basis of the sort of secret — and fabricated — evidence that Fulbright opposed in the hands of McCarthy. Unopposed, McCarthy destroyed lives. I do hope the United States will side with the openness of Fulbright and not the fear-mongering of McCarthy.

Israel routinely locks up Palestinians based on secret charges. All sorts of outrageous claims can be leveled based on information that Israeli officials garner coercively. Could the secret evidence against me have been extracted through the torture of some young Palestinian? Was I even the one denounced, or someone with a similar name? Was my “crime” sharing a classroom or a lunchtime conversation with someone Israel believes poses a danger? I have no way of knowing, and thus no way of defending myself.

My education is my gateway to the future. The master’s degree I would have earned at UC San Diego in computer science certainly cannot be attained in Gaza. And I am not alone. Hundreds of Palestinian students with dreams of improving their lives are stagnating intellectually in Gaza. The doors to our open-air prison have largely been slammed shut.

Israel tightened economic restrictions in 2006 following the election victory of Hamas. Hoping to weaken Hamas, Israel has gradually tightened restrictions on freedom of goods and people from the Gaza Strip to the outside world, maintaining a near total blockade on some 1.5 million Palestinian civilians for more than a year.

Thankfully, I have received support from people around the world. Journalists have wanted to hear my story. The American officials who saw me in Amman and Jerusalem upon my return were friendly and seemed embarrassed by my predicament.

Despite my treatment, I know that most Americans are kind people who mean well. What happened to me runs contrary to the good will exhibited by the American people. Israeli policies that relegate Palestinians in Gaza to prison-like conditions and Palestinians in the West Bank to an apartheid-like existence do not advance the cause of peace. The United States should use its tremendous sway with Israel to advance the cause of freedom and equal rights for Palestinians and Israelis alike.

We Palestinians have been stripped of our land for 60 years. But with educational opportunity we have persevered and made what we could of our lives. Limiting our educational prospects only perpetuates our status as a subordinate people. Nothing is served by confining our best and our brightest to Gaza. A better future for everyone lies in unlocking the gates to Gaza and allowing us to learn and gain exposure to the broader world – with all of the challenges, controversies and diverse perspectives it offers.

Fidaa Abed, recipient of a Fulbright scholarship, lives in the Gaza Strip.