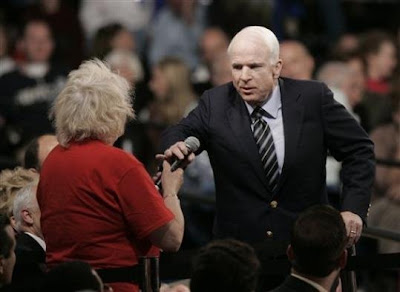 Anger from the Republican right: Gayle Quinnell who calls Barack Obama an Arab during town hall meeting, in Lakeville, Minn. on Oct. 10, 2008. Photo by Jim Money / AP.
‘What will defeat do to the Republicans?’
By Paul Krugman / November 3, 2008

Maybe the polls are wrong, and John McCain is about to pull off the biggest election upset in American history. But right now the Democrats seem poised both to win the White House and to greatly expand their majorities in both houses of Congress.

Most of the post-election discussion will presumably be about what the Democrats should and will do with their mandate. But let me ask a different question that will also be important for the nation’s future: What will defeat do to the Republicans?

You might think, perhaps hope, that Republicans will engage in some soul-searching, that they’ll ask themselves whether and how they lost touch with the national mainstream. But my prediction is that this won’t happen any time soon.

Why will the G.O.P. become more, not less, extreme? For one thing, projections suggest that this election will drive many of the remaining Republican moderates out of Congress, while leaving the hard right in place.

For example, Larry Sabato, the election forecaster, predicts that seven Senate seats currently held by Republicans will go Democratic on Tuesday. According to the liberal-conservative rankings of the political scientists Keith Poole and Howard Rosenthal, five of the soon-to-be-gone senators are more moderate than the median Republican senator — so the rump, the G.O.P. caucus that remains, will have shifted further to the right. The same thing seems set to happen in the House.

Also, the Republican base already seems to be gearing up to regard defeat not as a verdict on conservative policies, but as the result of an evil conspiracy. A recent Democracy Corps poll found that Republicans, by a margin of more than two to one, believe that Mr. McCain is losing “because the mainstream media is biased” rather than “because Americans are tired of George Bush.”

And Mr. McCain has laid the groundwork for feverish claims that the election was stolen, declaring that the community activist group Acorn — which, as Factcheck.org points out, has never “been found guilty of, or even charged with” causing fraudulent votes to be cast — “is now on the verge of maybe perpetrating one of the greatest frauds in voter history in this country, maybe destroying the fabric of democracy.” Needless to say, the potential voters Acorn tries to register are disproportionately “other folks,” as Mr. Chambliss might put it.

Anyway, the Republican base, egged on by the McCain-Palin campaign, thinks that elections should reflect the views of “real Americans” — and most of the people reading this column probably don’t qualify.

Thus, in the face of polls suggesting that Mr. Obama will win Virginia, a top McCain aide declared that the “real Virginia” — the southern part of the state, excluding the Washington, D.C., suburbs — favors Mr. McCain. A majority of Americans now live in big metropolitan areas, but while visiting a small town in North Carolina, Ms. Palin described it as “what I call the real America,” one of the “pro-America” parts of the nation. The real America, it seems, is small-town, mainly southern and, above all, white.

I’m not saying that the G.O.P. is about to become irrelevant. Republicans will still be in a position to block some Democratic initiatives, especially if the Democrats fail to achieve a filibuster-proof majority in the Senate.

And that blocking ability will ensure that the G.O.P. continues to receive plenty of corporate dollars: this year the U.S. Chamber of Commerce has poured money into the campaigns of Senate Republicans like Minnesota’s Norm Coleman, precisely in the hope of denying Democrats a majority large enough to pass pro-labor legislation.

But the G.O.P.’s long transformation into the party of the unreasonable right, a haven for racists and reactionaries, seems likely to accelerate as a result of the impending defeat.

This will pose a dilemma for moderate conservatives. Many of them spent the Bush years in denial, closing their eyes to the administration’s dishonesty and contempt for the rule of law. Some of them have tried to maintain that denial through this year’s election season, even as the McCain-Palin campaign’s tactics have grown ever uglier. But one of these days they’re going to have to realize that the G.O.P. has become the party of intolerance.