US Using UN Backdoor to Get Iraqi SOFA* 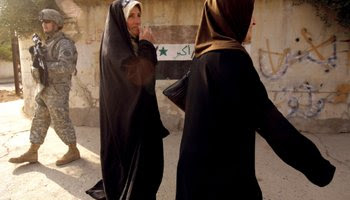 The Bush administration is looking to the U.N. Security Council to extend a mandate for U.S. troops to remain in Iraq beyond Dec. 31 – a move that would require Iraqi government cooperation but not Iraqi acceptance of a bilateral accord with Washington.

The shift in strategy follows the Iraqi government’s submission last week of several proposed changes a draft status of forces agreement (SOFA) being negotiated with the U.S.

“A Security Council extension is our fallback option,” one official said, requesting anonymity because he was not authorized to speak for attribution. “Our preference is to have a status of forces agreement, and there were clear compromises in the draft on both sides, but the Iraqis are asking for things that no U.S. president can agree to.”

“We are working through all of those, trying to put a lot of thought into how to respond to them,” Mr. McCormack told reporters Friday.

Raed Jarrar, an Iraqi exile who works as a consultant for the American Friends Service Committee in Washington and closely monitors Arabic transcripts from the Iraqi parliament, said the Iraqi demands include:

– Giving Iraqi courts the authority to decide whether they or U.S. authorities will try American soldiers accused or committing crimes while off duty.

– An outright ban on raids outside Iraq by U.S. forces based there – a demand apparently prompted by the recent U.S. raid on a suspected al Qaeda site inside Syria.

In addition, at least three Iraqi politicians, including former Prime Minister Iyad Allawi, have called for the Arabic version of the document to be revised so it matches the English version, Mr. Jarrar said.

U.S. and Iraqi negotiators reached the draft security accord last month, calling for U.S. forces to leave Iraqi cities by June 30 and combat troops to exit by the end of 2011, unless requested to stay.

Iraqi officials, however, faced domestic opposition and submitted a list of proposed changes to the draft. The Bush administration is not expected to respond until after Tuesday’s presidential election.

A 2003 a U.N. resolution provides the legal basis for the U.S. military presence, and the resolution expires Dec. 31. If nothing is done, U.S. troops would be forced to suspend most military and reconstruction operations in Iraq, and remain on their bases.

Moreover, it would leave future U.S. deployments entirely up to the next American president. In describing prospects for an appeal to the Security Council, the U.S. official said that Russia has made clear it will not exercise its veto.

But in discussing that possibility, Russian Foreign Minister Sergey Lavrov emphasized that the request to the Security Council would have to come from the Iraqi government.

“We’ll support Iraq’s request to the U.N. Security Council if the Iraqi government asks for the mandate of the current international military presence to be extended,” Mr. Lavrov said recently, the RIA news agency reported.

The U.N. option appears the most realistic at this time, given the upcoming change of administration in Washington and Iraq’s own elections next year, diplomats and analysts said.

“It’s the diplomatic equivalent of kicking the can down the road,” said Michael Rubin, resident scholar at the American Enterprise Institute for Public Policy Research.

Kim Holmes, vice president of the Heritage Foundation and assistant secretary of state for international organizations during President Bush’s first term, said the Iraqis “are thinking they may get a better deal” if Democratic candidate Sen. Barack Obama is elected president.

“They could welcome an extension of the U.N. mandate,” he said. “Postponing an agreement would avoid making some hard political decisions for them.”

But Michael O’Hanlon, senior fellow at the Brookings Institution, warned that the Iraqis “are playing with fire.”

“If Iraqis aren’t careful, they will hand Obama a rationale for a premature departure on a golden platter, assuming he wins Tuesday,” he said. “Even a sense of Iraqi ingratitude could be enough to trigger a decision to start marching brigades out at the rate of one to two a month, as promised, early in 2009.”

The administration has been trying to pressure Baghdad to sign the agreement by threatening to cut millions of dollars in reconstruction and other aid.

After the New Year, U.S. forces “will have no legal basis for operating in Iraq” if nothing is done, and that would be “disastrous” for security in the country, said a State Department official, who also requested anonymity.

“I don’t think the Iraqis fully realize the consequences” of an immediate U.S. withdrawal, he said, adding that many officials and government facilities would lose their U.S. protection, including Prime Minister Nouri al-Maliki.

Kelly Hearn contributed to this report.