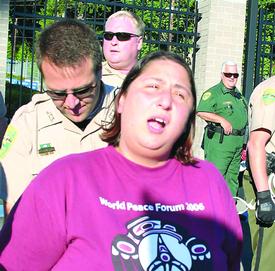 “I thought it was really lovely,” said Liz Rivera Goldstein.

She and her husband Dan were among those arrested — many of them smiling — and taken away in two Jefferson Transit buses to the Jefferson County jail in Port Hadlock.

All were to be charged with disorderly conduct said Jefferson County Undersheriff Tim Perry.

They were to be cited there, and then released Saturday night, he said.