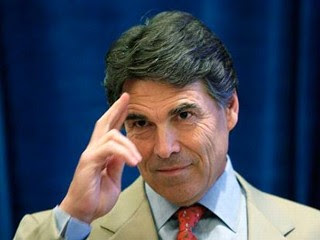 Mr. Hospitality his own self: the Hon. Rick Perry, Governor of Texas. Photo by Harry Cabluck / AP.

Gov. Rick Perry: ‘I think Austin would be an awesome place for Rush Limbaugh. You know, keep Austin weird.’

If Gov. Rick Perry (R-Tex) is looking to shore up the conservative base for his upcoming re-election, his latest move is a masterstroke: the governor says he will personally invite Rush Limbaugh to move to Texas.

The conservative radio host recently announced that high taxes are driving him out of New York.

“He’s not unlike other people who want to go to a place that’s got low taxes and fair regulations and a balanced legal system and a skilled work force,” Perry told the Dallas Morning News. “Excellence in Broadcasting hires a lot of people. So if he wants to go somewhere where he works hard and keeps more of what he makes, Texas is the place to do that.”

Perry added that he’s in the process of contacting Limbaugh directly.

And the governor has an unusual suggestion for what city the hardcore conservative should settle on, suggesting the liberal bastion of Austin.

“I think Austin would be an awesome place for Rush Limbaugh,” Perry said. “You know, keep Austin weird. Isn’t that the city’s unofficial motto?”

‘I’m concerned that his polarizing influence and his do-almost-anything-to-win behavior will hurt a city that has already lost most of its soul.’

I’m on the fence about this.

Being a radio talk show host myself, I respect Rush for his talent and the incredible market he has won over his 20+ year career. Having him in Austin, TX might make for some interesting discussions and debates. I welcome that. And overall, I don’t take him too serious. I consider Rush to be mostly info-tainment and a lot more bark than bite lately. But since I don’t agree with him on most of his policies or the way he goes about attacking others that he doesn’t agree with, I’m concerned that his polarizing influence and his do-almost-anything-to-win behavior will hurt a city that has already lost most of its soul.

My favorite Rush quote (great comic relief) “Consensus is the absence of leadership.”

In October of last year, I also remember Rush saying that Obama is endorsed by terrorists. Classic Rush!

What do y’all think?