Philosophy and the Economy : View from Berlin 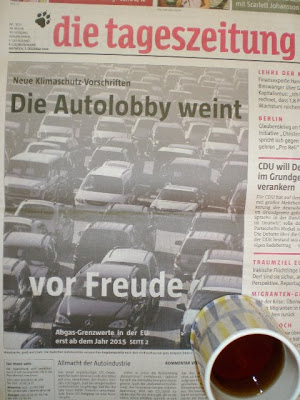 One small decision of mine: because I think The Rag Blog is significant I will be contributing articles at least once a week

Since my area of “expertise” is in philosophy, some articles will be “philosophical,” specifically in the field of ontology – what “is” “reality” (e.g. are there “common goods” and, with reference also to the US Constitution, how do “we the people” promote “the general welfare?” — one core stated purpose in the founding of the United States. Living in exciting Berlin in these “interesting times,” to reference a Chinese saying, I will also try to report on decision-making processes here.

For instance, the Chinese premier was just here for work on BOTH the capital market systemic financial crisis AND the deepening recession, including issues related to what kinds of “economic growth” are helpful, and what kinds are destructive, for getting “beyond” the various crises. The German foreign minister is meeting today with the US Secretary of State. Historians will have “rich times,” having much history to look back upon and to research. We get to live in these times. I will try to point to some current developments as we live in these times.

For this article, and in the spirit of providing some press review, I chose as a lead picture the front page from the German daily Die Tageszeitung (TAZ) showing masses of automobiles and concerning one specific European Union decision. I will explain that below. First I will focus not on details but on one huge difference between Germany and the USA.

Focus: What is meant by, and how are decisions made about, “common goods” and “promoting the general welfare?”

Since WW II there has been a broad and deep consensus that it is important to have a “mixed economy,” that “pure” capitalist markets create disasters and that democratic decisions are fundamental for creating and improving societies in which humans the right to self-determination. Here the decisions being made are NOT about whether or not to make decisions about economic activity, but how decisions are made, by whom, and which decisions are best. The traditional linguistic term used here, since the 19th century, was “social democracy.” After the last Great Depression here ended with the Nazis (and the insight: “been there, done that, regret it”) there has been broad consensus about the importance of a “democratic society,” and considerable differences about how best to make that work.

Since WW II there have been some huge changes here. One has been the commitment to work on what is the best “mix” in a “mixed economy.” Another is, based on the huge increase in productive power, facing the physical, environmental “limits” of “growth,” what kinds of “growth” are helpful or desirable and what kinds are destructive or dangerous. A broad consensus has been achieved to face such issues, and to work to transform the economy in ways that increase rather than destroy opportunities now and for future generations.

But now there is BOTH the crisis in the financial system AND the crisis of the deepening recession. No one here argues against democratic actions to get beyond the crises. Now the main debates about decisions involve whether the responses to the multiple crises will harm or improve the transition to a viable future. What kinds of “growth” are helpful, what kinds harmful, to get beyond the crises and positively on into the 21st century?

In Germany there is broad consensus that decisions about and in the economy need to be made, and that they must be socially and environmentally responsible decisions now and for the future. Germans take “common good” and “the general welfare” very seriously. For instance, regarding the financial system crisis, decisions are being worked on at this time to enable the large scale pubic takeover of banks, if necessary for the common good. Even “conservatives” here are willing to face this issue. Regarding the deepening recession, a large stimulus package is being developed and will be passed in a few weeks.

As I wrote in The Rag Blog upon Obama’s visit in Berlin before the election:

Obama has one very difficult problem, and one huge problem.

In contrast to German proportional voting, Obama has to win a majority off the bat, or he is off the field. So he has the very difficult problem of getting a numerical majority.

And then there is the huge problem: I think that we in the United States have a problem in our culture with identity politics.

Germans, even those who know the US well, often have a hard time getting their head around this. Some Germans know a lot about the great efforts of the civil rights movement, with its successes and failures. What I think they do not understand is that the very successes (as limited as they were) of the civil rights movement(s), the women’s movement, all the various efforts for empowerment, often were based on specific group identification, on identity politics. Philosophically put, there is a fundamental and ontological difference between an identity defined against others and an identity defined with respect for others. And “identity politics” in a diverse country does not necessarily lead to a sense of common ground, to agreement on “public goods” and “the general welfare”. Greg Calvert reflected a lot on this in writing his 1991 book Democracy from the Heart.

How do those in the USA treat the “public good” and “the general welfare?” Can there be agreement about, can democratic decisions be made about such things?

The current Republican line of attack on the US stimulus plan is to try to dismiss it as a “Christmas tree” of many particular wishes rather than a move towards the common good, and to push instead for tax cuts so that individuals can decide better than “Washington bureaucrats.” A philosophical extreme on this point was achieved by Margaret Thatcher in England when she said that there is no such thing as “society,” only individuals. Along with her impoverished ontology she helped impoverish England.

I am not suggesting that Germans are “better,” or that the Germaan philosophy should be imported to the United States. (The beer is definitely good.) I do note that Germany was a very homogeneous society until recently, and in that regard they may have had less trouble in identifying their “common interest.”

Looking over say three centuries of our history, the sheer fact that Obama did win a majority of the US electorate says something about changes in our culture. That was difficult enough – and yes, we did it. Now comes the hard part: Can US citizens define and achieve decisions about the “general welfare” and the “common good.”

Back when I was a kid it may have seemed easier. Back in the 1950’s a dominant saying was, “What is good for General Motors is good for the USA.” What was good for us, what was in “the national interest,” was defined by the decisions of General Motors (and General Dynamics etc.).

Now GM management can hardly dominate anything (except maybe some bad headlines).

As a long-time union member, I can certainly empathize with those (still) building cars, even though I was a shuttle bus driver. Something needs to be done. Decisions need to be made. But, for instance, bailing out the whale-oil industry will not help.

For those with a long-term interest in more democracy, in greater participation in deciding what is in our interest, the crisis does create potential for more democratic decision-making.

This brings me to the Front Page of the German daily newspaper Die Tageszeitung (TAZ) from Dec. 3, 2008, which featured a cover picture of many cars in eye-smarting smog.

THE AUTO LOBBY CRIES — FOR JOY

The provocative title of the front page editorial: “Omnipotence of the Auto Industry.”

Of course even the German auto industry is NOT omnipotent. In fact it is a mess.

The TAZ was being its provocative self, exaggerating to make a point about one specific decision by the European Union (EU). In the face of the increasingly deep recession, one EU agency granted a two year postponement, from 2013 to 2015, for strict EU wide limits on CO2 exhaust from motor vehicles. Other decisions — for instance, to change the vehicle tax from engine size to CO2 emissions — are in the works in Germany.

My point here is that the EU and Germany are certainly no utopias regarding good stewardship of common goods. The auto lobby did manage, under the circumstances, to get a little relief time for retooling. But even that was, for the TAZ, a big mistake.

The larger issue is whether the financial system crisis AND the recession will hinder and slow down — or will speed up — the transformation of economic activity to enable a viable future. What kind of “growth” will help, and what will hinder, our getting beyond the crises?

I will go into further details from Germany in future blogs.

My point in this piece is that even if Germany is no utopia, there are decision processes here which take “common goods” and “promoting the general welfare” seriously. I suggest this will be a challenge in the USA we need to meet. Obama alone can not do this. The situation does seem to open up potentials for “more democracy” in the long-term, for “we the people” to participate in good governance and for creative, intelligent design of a future “beyond the crisis”.

[David MacBryde — our correspondent in Berlin — was an Austin activist and a contributor to The Rag Blog’s historical precursor, The Rag , an icon of the 60s-70s underground press.]