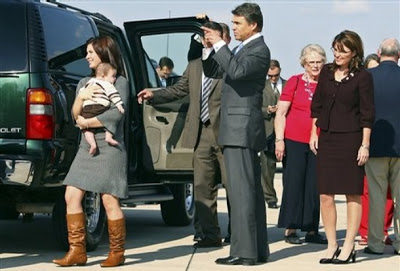 Whoopie Doo! The yahoo guv of the nation’s “largest” state (if you include all the ice) steps into Texas political doo-doo as she throws her gun into the Rick Perry-Kay Bailey Hutchinson gubernatorial shoot-out. — .td / The Rag Blog.

‘He walks the walk of a true conservative. And he sticks by his guns – and you know how I feel about guns,’ Sarah Palin said.

Palin, who electrified the GOP base as the party’s vice presidential nominee last year, has strong support among the party’s social conservatives. Her endorsement appeared aimed at undercutting Hutchison’s appeal with GOP women. Both groups will be important in picking the party’s nominee in next year’s GOP primary.

In a letter to “Texas Republican women” distributed by the Perry campaign, Palin touts the Texas governor’s conservative credentials.

“He walks the walk of a true conservative. And he sticks by his guns – and you know how I feel about guns,” she said.

Palin cited one of the Perry campaign’s top issues – opposition to federal financial bailouts. And she singled out Perry’s opposition to abortion rights.

“Not every child is born into ideal circumstances, but every life is sacred,” Palin said in the mail appeal. “Rick Perry knows this – it is at the core of his being.”

Hutchison supports abortion rights, although with restrictions, including parental notification and a ban on certain late-term procedures.

The GOP primary draws a large number of social conservatives for whom abortion and gay marriage are litmus-test issues. And in recent weeks, Perry has made high-profile appeals to abortion opponents.

Perry spokesman Mark Miner called Palin, seen as a potential future GOP presidential nominee, “a star of the Republican Party.” Hutchison spokesman Todd Olsen said the senator has broad support among Texas Republicans “who know what is going on in Texas,” adding: “We look forward to having the [Alaska] governor’s support after the primary.”

According to the Perry campaign, the letter went to 10,500 members of the Texas Federation of Republican Women, an influential organization whose members have been an important part of Hutchison’s political base.

The letter does not mention Hutchison by name.

Taffy Goldsmith of Dallas, a past president of the Texas federation and a Hutchison supporter, said Monday that she doesn’t think the endorsement will have much effect.

“There is a lot of admiration for Governor Palin and what she has done both in her own state and to energize the party,” Goldsmith said.

“But women in this organization are so state-oriented and so well-grounded they will base their decisions on what they know, not what somebody else recommends.”

As Republican governors, Perry and Palin have both been advocates of domestic drilling for oil and energy issues. Perry served last year as head of the Republican Governors Association and introduced Palin when she spoke to the group.

1 Response to Palin Endorses Perry : Birds of a Feather