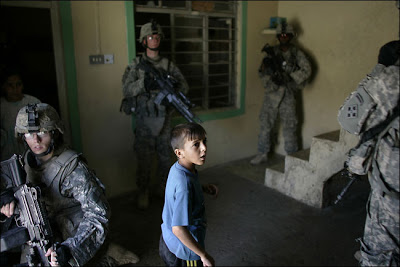 SAN FRANCISCO — U.S. journalist Zoriah Miller says he was censored by the U.S. military in the Iraqi city of Fallujah after photographing Marines who died in a suicide bombing.

On Jun. 26, a suicide bomber attacked a city council meeting in Fallujah, 69 kms west of Baghdad, between local tribal sheikhs and military officials.

The explosion also killed two interpreters and 20 Iraqis, including the mayor of the nearby town of Karmah, two prominent sheikhs and their sons, and another sheikh and his brother. All were members of the local “awakening council,” one of the U.S.-backed militias that have taken up arms against al Qaeda in Iraq, according to U.S. and Iraqi authorities.

Miller was embedded with Marines on a patrol one block from the attack when it occurred. He had originally turned down the option of going to report on the city council meeting that was bombed.

Miller ran with the Marines he was with to the scene of the attack. “As I ran I saw human pieces…a skull cap with hair, bone shards,” he told IPS during a telephone interview from the so-called Green Zone in Baghdad. “When we arrived at the building it was chaotic. There were Iraqis, police and civilians running around screaming. Bodies were being pulled out of the building.”

“I went in and there were over 20 people’s remains all over the place,” Miller continued, “Of the Marines I jogged in with, someone started to vomit. Others were standing around, not knowing what to do. It was completely surreal.”

“At that moment I realised this was far beyond anything I’d experienced, and I realised I wanted to focus and make sure I could capture what it felt like, and the visual horror,” Miller explained.

“I thought, ‘Nobody in the U.S. has any idea what it means when they hear that 20 people died in a suicide bombing.’ I want people to be able to associate those numbers with the scene and the actual loss of human life. And to show why soldiers are suffering from PTSD [post-traumatic stress disorder],” Miller told IPS.

Miller was taken out of the building by Marines, but then allowed back inside where he took one last photo of the carnage before they closed the scene to him.

“We spent most of the rest of the day as Marines picked up body parts and put them in buckets and bags,” he said.

In an Iraqi Police station in Karmah, the Naval Criminal Investigative Service (NCIS) was brought in to investigate the bombing. Millers’ photos were the only ones of the scene, so the NCIS team asked for them.

“I made them copies, but then one of the Marines came in and told me to delete my memory card after I give them the photos, and I refused,” Miller told IPS, “I told the NCIS that if they forced me to delete them, I would stop sharing them. So they stopped pressing that issue.”

Miller said that he was following the rules for embedded journalists. “That evening, during the debriefing, the guys [Marines] I was with told me that the higher-ups had said I was a stand-up guy and behaved well and to treat me well. The guys I was with were all very much on my side.”

Miller explained to IPS that he meticulously showed his photos to the Marines he was with to make sure he was not going to show any photos that would upset the family members of the deceased Marines. “They were all okay with them, so then about 96 hours after the bombing I published the photos on my blog.” [The original blog post is here. It is graphic. As Miller himself says, the pictures “show the actual loss of human life.” rdj]

Then things got interesting.

“Tuesday [Jul. 1] I awoke to a call in their combat operations centre, and the person on the phone told me they were a PAO (Public Affairs Officer) at Camp Fallujah, and he wanted me to take my blog down right away,” Miller told IPS. “I asked them why, and was told then called back after five minutes by a higher ranking PAO who claimed I had broken my contract by showing photos of dead Americans with U.S. uniforms and boots.”

Miller said the PAO claimed he was not allowed, by the embed contract, to show dead or wounded U.S. citizens or soldiers in the field. “I never signed any contract for that,” Miller said.

He was called back after another five minutes and told his embed was terminated and they would send him back to Baghdad on the next flight. He was then taken back to Camp Fallujah where he said, “Everyone was extremely angry and fired up at me.”

Nevertheless, the lower ranking Marines he had embedded with “were on my side, and they told me they thought that what was happening was wrong.”

Miller explained that he grew nervous when the flight was cancelled due to a sandstorm, and then a security guard was assigned to him.

“I started to feel uncomfortable with this,” Miller explained. “The next day, Gen. Kelly, [Major General John Kelly, who is the Commanding General of the I Marine Expeditionary Force] wanted to have some words with me. I was to meet with him at 3 pm, and we sat outside in the sun for two hours and he never showed.”

Miller was told he would be flown out that night, but he was deleted from the flight and told that General Kelly wanted to see him, so he waited again until Thursday, Jul. 3. Again the general did not appear, so Miller was given an official letter about the grounds for the termination of his embed, signed by Gen. Kelly, and flown to Baghdad.

“Now, as I think about it, I think they needed the extra time to figure out what they were going to say about my dismissal,” Miller said. “Their original reason ended up being bogus, so they had to figure something else out.”

The letter he was given stated reasons for his dismissal as “you photographed the remains of U.S. soldiers”, “you posted these images along with detailed commentary”, and “by posting the images and your commentary you violated 14 H and O of the news media agreement you signed”.

In addition, the letter, which Miller read to IPS, stated, “By providing detailed information of the effectiveness of the attack and the response of U.S. forces to it, you have put all U.S. forces in Iraq at greater risk for harm.”

Miller feels the reason for his dismissal is otherwise.

“The bottom line is that the thing they cited as the reason for my dismissal was ‘information the enemy could use against you’. They realised, probably from keeping track of my blog, that I was not showing identifiable features of a soldier…and they couldn’t find a reason to kick me out. Because it was a high ranking person who got killed, they were all fired up.”

Miller concluded, “Up to that point they said it was because I showed pictures of bodies with pieces of uniform and boots. The letter, though, doesn’t mention that at all. I checked the document I had about ground rules for media embeds, and I followed them.”

The Pentagon would not comment on the story when contacted by IPS, saying they had no information on Miller’s case beyond what Central Command had already posted.