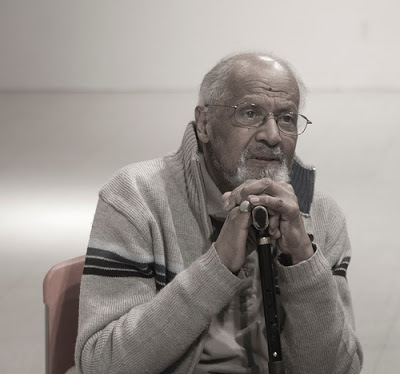 Photographer Roy DeCarava, who died Oct. 27 at age 89, dedicated his 60-year career to capturing images of African Americans. His subjects ranged from daily life in his hometown of Harlem to the Civil Rights movement, but his most noted work featured photographs of jazz greats like Duke Ellington, Thelonious Monk, Billie Holiday and Louis Armstrong…

The first black photographer to win a Guggenheim Fellowship, DeCarava was also awarded the National Medal of Arts… In 1996, his work was the subject of a major traveling retrospective organized by the Museum of Modern Art in New York City. 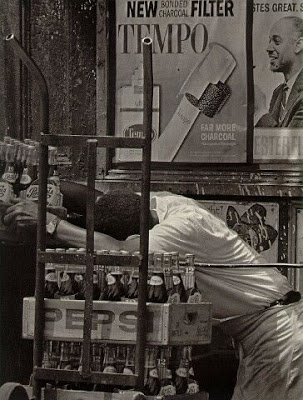 “pepsi,” 1964. Photo by Roy DeCarava.
The Sound I Saw:
Photography from a black point of view

Pictures of a man leaving the subway, of a saxophone, a black woman’s face. John Coltrane. Langston Hughes. The black New York City photographer who captured this Harlem history in its latter heyday was Roy DeCarava.

Educated at Cooper Union, and struggling to survive working as an illustrator, Mr. DeCarava always managed to find time to photograph ordinary life in his neighborhood. Whether it was the murky view out a dirty window from a cheap room, or the iconic image of a (now) Jazz Giant, Roy had a way of ennobling everything he snapped. But not in the usual style of strictly European art based traditions or sentimentality. It was as if the simple objects portrayed were the same as the faces of the people, of the Jazz musicians — all possessing a story to tell.

What Roy DeCarava accomplished, and what we now take for granted, is a black point of view. What English word do we use to describe this type of vision? Good question. Perhaps it is better that it doesn’t have a name like “Soul” that could be easily turned into advertising copy and lose all meaning. What Roy DeCarava photographed was the tenderness and quiet pride flowing through everyday Harlem life, the smoldering Jazz solo across a smoke filled club, the structural beauty of a black person’s face.

Included in the seminal photo collection The Family of Man (1955), DeCarava was still mostly intolerant of the white art world. Although he received a Guggenheim Grant in 1952, Roy felt no need to acknowledge that art world or participate in the mainstream art scene. Instead he turned his own apartment in Harlem into a gallery for a few years, exhibiting the work of other art photographers. Instead of working for Life Magazine full time like black photo pioneer Gordon Parks, Roy DeCarava sponsored a protest against the publication.

Roy was also a great photography teacher (at Hunter College), sending hundreds of student camera eyes out into the streets in search of poetic truth. Roy DeCaravara’s great cultural accomplishment was to equate black street life with black Jazz, seemingly in an effort to ensure that one would not rise without the other. It was all about timing, whether it was Jazz, or Photography, or Life.

Asked what he saw in the Jazz performance that made it like photography he said: “I improvise. Improvisation is all about individual interpretations, individual expression. And that’s what I’m doing.” He also said: “in between that one-fifteenth of a second, there is a thickness.” That was a poet speaking. Roy DeCarava passed on this week, but his photographs are still telling their simple eloquent stories of black life.

4 Responses to Photographer Roy DeCarava : ‘The Sound I Saw’