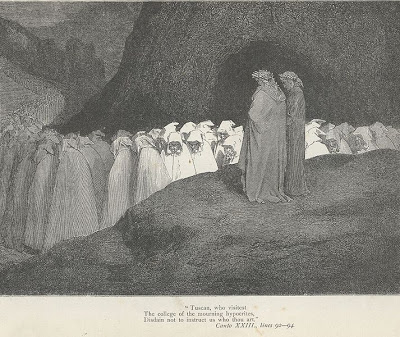 Of course, Sen. Lieberman does not stand alone as a hypocrite. In his company are all of those elected representatives in Congress and their families, who receive Federal Employment Health Benefit Programs, the Rolls Royce of health plans.

Sen. Joe Lieberman’s announcement of his complete and absolute opposition to health care for the poorest and sickest of all Americans took me back to when I was trying to understand Dante Alighieri in my early years. I do recall in his Inferno that Dante subdivided Hell into nine circles, the first circle being the widest and progressively the ninth and inner circle being the smallest and reserved for Lucifer.

Last evening I did a bit of research with Sen. Lieberman in mind and found within the eighth circle the hypocrites, and I quote Dante with a minor modification:

Here we see hypocrites, plodding forever around in their circle: And now we see a people decked with paint, who trod their circling away with fear and groan. And slow, slow steps, seemingly subdued and faint. They all wore cloaks, with deep hoods forward over their eyes, and shaped in fashion like the great cowls some monks wear; Outwardly they were gilded dazzling bright, But all within was lead and weighted thereby, an emperors cape would have seemed feather light. O weary mantle for eternity! Once more we turned to the left, and by their side Paced on, intent upon their mournful cry.

It would appear that Joe Lieberman has become the ultimate hypocrite within the modern American political establishment and that takes quite a bit of effort on his part. During the election that introduced Lieberman to most Americans he designated himself as a very “religious” man who didn’t campaign on The Sabbath. Nevertheless, he voted for every war appropriation designated by the Bush Administration, perhaps inspired, in part, by the two billion for each submarine produced in Connecticut and in part by his representation of Israel’s Likud Party in The U.S. Senate.

He for all practical purposes defected to the Republican Party and actively supported Sen. John McCain for president. He accepted rehabilitation from a naive Sen. Harry Reid after the election, rejoined the Democratic caucus, and was granted chairmanship of the Homeland Security Committee.

Now, after voting for a $1.4 trillion dollar bailout of the insurance giant AIG, it turns out that he thinks the government cannot afford half that amount to provide the American people with decent health care, including health care for the returning veterans’ families, the families of the active military, and the unempowered average American. Once again he plunges a shiv into the back of the Democratic Party and the American people.

Of course, Sen. Lieberman does not stand alone as a hypocrite. In his company are all of those elected representatives in Congress and their families, who receive Federal Employment Health Benefit Programs, the Rolls Royce of health plans. Since this is government insurance, we the tax payers pay 75% of their premiums. Our representatives pay $503 per year for the coverage. Further, if they need an operation they have the option of having it done at a government hospital such as Walter Reed or Bethesda Naval Hospital.

These are the hypocrites who repeat and repeat that socialized medicine is an evil, that the government cannot and should not pay for it. They are protecting us from the government health care which they enjoy. We should also remember that the tax-payer continues to subsidize our elected representatives’ insurance after he/she leaves the congress.

On top of all this we now have Speaker Pelosi introducing health care legislation in the House with a far from “robust” public option. It seems that many of the progressives in the house want payment to physicians to be based on Medicare rates, while the Blue Dogs want these fees to be negotiated. I must admit that I have mixed feelings, as in many geographic areas, Medicare reimbursement is inadequate, and I note that under the Canadian National Health Plan that fees are negotiated yearly at the Provincial level.

It seems to me that the impasse could easily be settled by granting increased fees to primary care physicians — who are in such short supply — under the Medicare schedule. As we have noted previously, and as has been underlined by The American College of Physicians, this shortage will not be solved without making the fees of the general practitioner, the internist and for those in internal medicine subspecialties and pediatrics generally on a par with certain of those traditionally overpaid surgical subspecialties.

Any “public option” — to be effective in reducing insurance costs and providing for the well-being of the public at large — must provide (1) universal coverage, (2) the ability for any and all citizens to opt for the public plan without restrictions, thus reducing health care costs overall, and (3) must begin to provide coverage at the earliest possible time, and not await 2013, as many Americans will continue to die for lack of health insurance in that interval.

Granted, it will require time to provide a well managed, all inclusive program, but it should be instituted gradually over the next three years to start providing coverage for those without insurance. As Dr. Howard Dean pointed out on MSNBC, it is good politics looking forward to the elections of 2010 and 2012 to make the public aware that the government is exhibiting the ability and compassion to implement the program. As for the proposed right for states to “opt-out,” it is probably harmless to include that within a bill but it appears to be a bit of legislative absurdity.

Yesterday the progressives in Congress met with President Obama and the full context of the discussion has not been made public. The President has been a first class waffler relative to health care reform. It is up to the thinking progressives to keep the pressure on for the next several weeks and to try and offer him guidance. Without his leadership the dream of decent health insurance for all can never be achieved.

We must grant that the President has a full plate with both health care and Afghanastan; however, Mr. Obama is an intelligent human being, and was certainly aware of these problems prior to his election. In my opinion, the well being of the American people takes precedence over the umpiring of tribal feuds and pipe line building in a nation in central Asia that has historically, since the time of Alexander the Great, rejected foreign occupation.

On October 20, Robert Reich wrote on his blog,

Last January, as I understand it, the White House promised Big Pharma, big insurance, and the AMA the moral equivalent of what Joel Halderman allegedly demanded of David Letterman: hush money. The groups agreed to stay silent or even be supportive of health care reform, as long as they were paid off. But now it’s time to collect, the bill is larger than the White House expected, and its going to fall like an avalanche on middle class Americans in coming years. That could mean an ugly 2012 election (read Sarah Palin). So the President has to do what Letterman did: refuse to pay.

On October 26 Reuters published an article indicating that our current health care system wastes up to $800 billion per year due to:

The same report indicates that the average U.S. hospital spends one quarter of its budget on billing and administration, nearly twice the average in Canada. American physicians spend nearly eight hours per week on paperwork and employ 1.66 clerical workers per doctor, far more than in Canada. Yet, primary care doctors are lacking, forcing wasteful use of emergency rooms.

Yet the On Line Journal reports that

United Health Care’s 155% profits on Medicare Plans (“Medicare Advantage”) must be a company record, especially in a down economy, and an embarrassing fact, particularly as the conservatives in the Senate Finance Committee fight to preserve the present payment structure of United Health Care and its fellow insurance companies. Private insurance plans in medicare cost up to 19% more than the cost to care for the same people under the public Medicare program.

In other words the taxpayers lost $2.7 billion in 2005 to private medicare advantage plans and their parent insurance companies. Yet the insurance industry and its prostitutes “keep telling innocent seniors that they will suffer (even more) if they lose their Medicare Advantage Plans.” This is not true. “Medicare Advantage Plans can hurt people with Medicare. Two studies found that people could end up actually paying out-of-pocket costs in a private plan than in straight Medicare.”

I have previously warned the consumer about the purchase of insurance, medical devices, or pharmaceuticals advertised on TV. It does not require an Einstein to recognize that TV ads cost money, and that the consumer pays in the end. The current edition of Consumer Reports discusses Flomax, the highly advertised drug for an enlarged prostate. In 2008 the manufacturer spent $116 million advertising Flomax and racked up sales of $1.2 billion. Flomax can cost up to $246 monthly to the patient; however, one can obtain a generic equivalent, Doxazosin, for approximately $10 per month.

Always ask your doctor about generic equivalents, which are just as good as name brands, and are equally safe. If your physician refuses to discuss the matter, you should be concerned that he MIGHT be getting a kickback on the brand name version, or at the least is poorly informed. It is easy to look up this information in a book entitled the Physicians’ Desk Reference.

Unhappily, true health care reform is in the hands of Congress, and that reminds me of a comment by Mary McCarthy:

The American, if he has a spark of national feeling, will be humiliated by the very prospect of a foreigner’s visit to Congress — these, for the most part, illiterate hacks whose fancy vestys are spotted with gravy, and whose speeches, hypocritical, unctuous and slovenly, are spotted with the gravy of political patronage, these persons are a reflection on the democratic process rather than of it; they expose it in its underwear.

4 Responses to Divine Comedy : Joe Lieberman and the Hypocrites