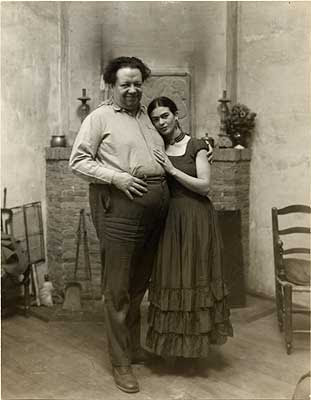 In 1940, the virgin and the warrior rewed
the last time, the first time, para siempre
I am a paradox slouching to be reborn in rebirth
I am a plumed serpent of mated eagle and snake

a saucer of atole, my mother’s dowry
a bowl of frijoles, my father’s gift
mi madre, the doe, the wounded one
mi padre, the frog, the insatiable one

I watch the buddah frog on the lilly pad
waiting as the hummingbird draws near
that which must be, will come at last
I learn the future through my past

I am the child beating upon a war drum
I sound the cadence, announce the fall
I plant foot and banner firmly on the shore
I am inheritor of a brave new world

I am the body of Adam and the soul of Eve
I am the separation of Darkness and Light
I am Cristobal Unborn, Quetzalcoatl Reborn
Soy el hijo de Rivera y Kahlo.

[San Antonio writer Gregg Barrios, who wrote for The Rag in 60s Austin, is the author of the award-winning play Rancho Pancho. “Frida y Diego” is from his latest collection La Causa, to be published by Hansen Books in September. “El hijo de Frida y Diego” was also published in the San Antionio Express-News.]

The following reading is of an anti-war poem that Gregg Barrios wrote during the Vietnam era that was featured in the anthology, “Vietnam and Aztlan,” published by University of California Press. It was presented as part of an “anti-war/pro-peace” reading in San Antonio in 2008.

This entry was posted in Rag Bloggers and tagged Hispanic, Peace Movement, Poetry. Bookmark the permalink.