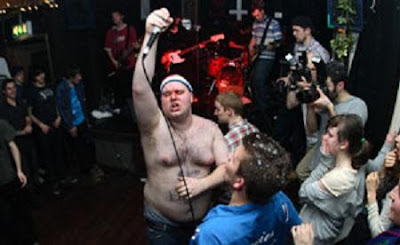 Fucked Up fucks up.

A riot occurred in the early hours of this morning (March 15) on Lamar Pedestrian Bridge in the midst of the SXSW festival in Austin, Texas, during an impromptu party gig by hardcore rockers Fucked Up.

Fucked Up were playing an unofficial gig at around 4 a.m., when fans who had attended SXSW gigs earlier in the night began congregating. Soon around 1,000 fans were on the bridge. Fired up by the music, the fans began to mosh, creating a mosh-pit 30-people wide.

The bridge began to buckle and bounce under the weight of the crowd, which prompted many fans to jump into the river to escape. Police soon arrived at the scene, but realised that they were powerless to halt the riot and could do nothing but wait until it quelled.

Fucked Up’s guitarist, Mike Haliechuck told NME.COM that he thought the bridge was going to collapse, explaining why fans felt they had to jump into the water.“I could feel the bridge going up and down – it was crazy,” he said. “The police couldn’t do anything, so they just had to wait.”

It is not thought that any fans were hurt in the incident.

This entry was posted in RagBlog and tagged Austin, Counterculture, Music, Popular Culture. Bookmark the permalink.