Poor Junior: The Free Markets Say Shoe-Throwing Is the Next Olympic Sport 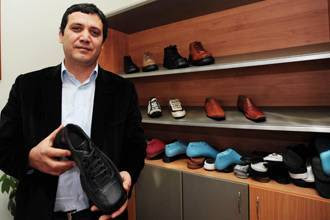 ISTANBUL – The alleged maker of the shoes that an Iraqi journalist hurled at U.S. President George W. Bush has had to take on 100 extra staff to cope with a surge in demand for his footwear, he said on Monday.

“Between the day of the incident and 1:00 pm today we have received orders totaling 370,000 pairs”, Istanbul-based Serkan Turk, head of sales at Baydan Shoes, told AFP.

Normally the firm sold only 15,000 pairs a year of the model that Muntazer al-Zaidi threw at the U.S. president at a press conference in Baghdad on December 14 to become an instant hero across the Arab world, he said.

Turk said orders had initially flooded in from Iraq, followed by other Middle East countries and finally from the rest of the world, including for 19,000 pairs from the United States.

Turk insisted the company was not profiting from the soaring demand to up the factory price from the $27 (19.30 euros) it had been charging, while adding that it was “delighted from all points of view” at its unexpected success.

Throwing shoes is considered a grave insult in the Arab world, but Turk indicated that they would probably not have done Bush much harm had they hit him.

Turk’s claims come after the investigating judge in the Zaidi case said last week the famous shoes were detsroyed by security agents durning checks to ensure they did not contain explosives.

Zaidi, 29, has been charged with “aggression against a foreign head of state during an official visit,” an offence that carries a prison term of between five and 15 years under Iraqi law.

He is to go on trial on December 31, an investigating judge said Monday, rejecting allegations by the journalist’s family that he had been tortured in custody.

This entry was posted in RagBlog and tagged Iraq, Iraq War, Political Protest. Bookmark the permalink.