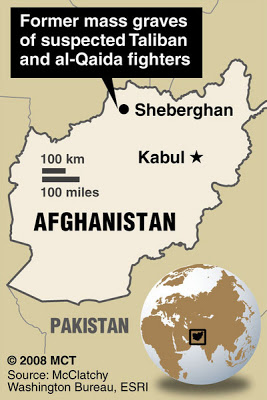 When the trucks arrived at a prison in the town of Sheberghan, near Dostum’s headquarters, they were filled with corpses. Most of the prisoners had suffocated, and others had been killed by bullets that Dostum’s militiamen had fired into the metal containers.

Dostum’s men hauled the bodies into the nearby desert and buried them in mass graves, according to Afghan human rights officials. By some estimates, 2,000 men were buried there.

Earlier this year, bulldozers returned to the scene, reportedly exhumed the bones of many of the dead men and removed evidence of the atrocity to sites unknown. In the area where the mass graves once were, there now are gaping pits in the sands of the Dasht-e-Leili desert.

A U.N.-sponsored team of experts first spotted two large excavations on a visit in June, one of them about 100 feet long and more than 9 feet deep in places. A McClatchy reporter visited the site last month and found three additional smaller pits, which apparently had been dug since June.

Faqir Mohammed Jowzjani, a former Dostum ally and the deputy governor of Jowzjan province, where the graves were located, told McClatchy that it’s common knowledge that Dostum sent in the bulldozers.

He speculated that Dostum wanted to destroy the evidence because of local political trouble that could have made him more prone to prosecution for the killings.

Last year, Dostum and the then-Jowzjan governor became embroiled in a feud that killed seven people and wounded more than 40. This year, Dostum and his men kidnapped and reportedly beat a rival Afghan leader.

“Maybe General Dostum did it because of a fear of prosecution in the future,” Jowzjani said.

Another local Afghan official said that Dostum had begun to worry that the 2001 killings could come back to haunt him. “Everyone in the city (Sheberghan) knows that the evidence has been removed,” said the official, who spoke on the condition of anonymity because of worries about being killed for talking about the subject.

“When the crime happened, (Dostum and his commanders) didn’t think they would ever be prosecuted,” the official said. “But later they began to worry . . . they have taken all the bones and thrown them into the river” that’s about half a mile from the graves.

NATO — which has command authority over a team of troops less than three miles from the grave site — the United Nations and the United States have been silent about the destruction of evidence of Dostum’s alleged war crimes.

“The truth is that General Dostum went out with bulldozers and dug up those graves,” Jowzjani charged. “I don’t know why UNAMA” — the U.N. mission in Afghanistan — “hasn’t said anything in this regard . . . maybe because of fears about his power, or maybe they made a deal.”

Gen. Ghulam Mujtaba Patang, the commander of Afghanistan’s national police in the north, said that he knew that the graves had been emptied. He noted that “the digging was done very professionally” and said that U.N. and NATO-led teams in the area were also aware. (While provincial reconstruction teams are led by individual nations, their military components are under NATO command.)

“I don’t understand why they didn’t secure the area,” Patang said in an interview. Perhaps, he said, Western officials “are nervous” about the power that Dostum has locally and don’t want to upset local security by pushing him on the matter.

Dostum was unavailable for comment, and one of his senior aides, Gen. Ghani Karim Zada, declined several interview requests.

The Bush administration, too, has remained silent. U.S. officials claimed that they had no knowledge of the deaths of the prisoners in the convoy until the news media revealed them in 2002, and now the administration has remained silent about Dostum’s reported effort to destroy the evidence of them, which also would be a major violation of international law.

American officials say that Dostum’s alleged war crimes are a matter for the Afghan authorities. But the U.S.-backed government of President Hamid Karzai is weak and depends on American and NATO troops to fight a growing Taliban insurgency that now operates in most of Afghanistan and all but surrounds Kabul, the capital.

However, the fact that U.S. special forces and CIA operatives were working closely with Dostum in late 2001, when the killings took place, has fueled suspicions that the warlord got a free pass.

The U.S. Defense Department has said that it found no evidence of American involvement or presence during the 2001 incident. If there was an investigation, however, its findings have never been made public.

“At the time, we had a handful of special forces and CIA, and there was no way we could have exercised any oversight” of the thousands of detainees under Afghan control, said Joseph Collins, who was then the deputy assistant secretary of defense for stability operations.

When he was asked about the detainees suffocating in metal shipping containers, Collins, who’s now a professor at the National War College, said that “I think most people just took for granted what he (Dostum) said: that it was a horrible accident.”

McClatchy interviewed eight Pakistani men last year who said that Dostum’s gunmen had stuffed them in the containers. The men, mostly low-level Taliban volunteers, said they’d had to climb over dozens of dead bodies to get out of the containers.

Another man who said he’d made the trip to Sheberghan in a container full of dead and dying men was Tariq Khan. He said that when Dostum’s men shot into the metal box, “some people were shot in the eye; some were shot in the neck.”

Dostum offered to take Pierre-Richard Prosper, who was then the U.S. ambassador-at-large for war crimes issues, on a tour of the grave site in late 2002, but Prosper declined. He was pressing a reluctant Afghan government and the U.N. to take the lead in investigating the killings.

“We felt the Afghans needed to play a role,” Prosper said in a telephone interview. “If you’re a new government, and you want to move forward, you have to deal with the past.”

However, no investigation was likely without strong U.S. backing, and Prosper said that he couldn’t recall whether Washington ever gave funding for a probe.

Farid Mutaqi, a senior investigator for the Afghanistan Independent Human Rights Commission in the nearby city of Mazar-e-Sharif, said that it was almost impossible to visit the site because of Dostum’s power in northern Afghanistan.

Mutaqi said there’d been threats on his life and those of his staff members from Dostum. There are rumors that the site was mined and that Dostum’s men would torture or kill people if they were caught researching in the area. At least three Afghans who witnessed the original digging of the mass grave or who investigated it later reportedly were killed, and a handful of others were beaten.

Mutaqi said that he told officials at the United Nations and the local provincial reconstruction team that Dostum’s men had disturbed the mass graves this year. They did nothing, he said.

Now, Mutaqi said, “You can see only a hole. In the area around it you can find a few bones or some clothes. The site is gone . . . as for evidence, there is nothing.”

A spokesman for the United Nations in Afghanistan, Adrian Edwards, acknowledged in an e-mail statement that the U.N. had known that the graves had been dug up but had kept quiet.

“You’re right that we don’t always make public statements, but that’s because we’re in a conflict environment and have to weigh up whether doing so will stall chances of progress against impunity in other areas or put lives at risk,” the statement said. “It’s a judgment call we constantly strive to get right, and this is not the only instance where the choices we have to make can be extraordinarily tough ones.” Edwards noted that the U.N. is awaiting a report about the site by a forensic specialist.

The spokesman for the U.N.’s Office of the High Commissioner for Human Rights, Rupert Colville, said that while he didn’t know the details of the digging at the site, “there cannot be impunity for war crimes of this nature and scale . . . it’s a real shame.”

Spokesmen for NATO and the U.S. Embassy in Kabul denied knowing that the remains of hundreds of men had been removed from the site, and had no further comment.

“We have no information about bulldozers or digging at the site,” said Lt. Cmdr. James Gater, a spokesman for the NATO mission in Afghanistan. The U.S. general who heads NATO forces in Afghanistan, Gen. David McKiernan, wouldn’t do an interview, Gater said.

U.S. Embassy spokesman Mark Stroh said that he’d checked with several officials at the embassy and “nobody seemed to have any visibility on this.” Stroh added that “We don’t necessarily monitor all of Dostum’s behavior.”

A McClatchy reporter, traveling without official escort, took GPS readings of the open pits last month, and a forensic investigator with Physicians for Human Rights, a group contracted by the U.N. to examine the site, confirmed that they were in the same area where the grave site was found in early 2002.

In May 2002, the U.N. announced that a Physicians for Human Rights team had dug a test trench in the area and found 15 bodies, three of which had been exhumed and found to have died recently of asphyxiation

In November 2002, amid the Physicians for Human Rights findings and news reports, a top-secret cable from the State Department’s Bureau of Intelligence and Research said that the number of people killed during transport to Sheberghan “may approach 2,000.”

The cable also said that while there was no security at Dasht-e Leili, U.N. personnel from Mazar-e-Sharif were monitoring the grave ” ‘every few days’ for signs of tampering.” There’d been plans for a detailed forensic investigation of the site in spring 2003.

“The hope had been to do a full exhumation in 2003,” said Nathaniel Raymond, a senior investigator at Physicians for Human Rights. “It didn’t happen.”

The U.N. monitoring of the site stopped. Edwards, the U.N. spokesman, said that he was still trying to reach officials who’d been present to get an explanation. The U.N., NATO, U.S. forces and the Afghan government never took any formal responsibility for patrolling the grave site.

Physicians for Human Rights made several requests to top U.S. officials to secure the mass graves, including an August 2002 letter to then-Secretary of Defense Donald H. Rumsfeld asking that he “reconsider the position of the Defense Department and assure security at the grave site.” Four months later, the organization sent a letter to then-Deputy Defense Secretary Paul Wolfowitz saying that it was crucial to provide a small security detachment.

“From the time we discovered the site in January 2002, we had been advocating privately and publicly to the United Nations, the U.S. and the Afghan government to ensure consistent site protection and protection of forensic evidence,” Frank Donaghue, the chief executive officer of Physicians for Human Rights, said in a statement to McClatchy. “And clearly that did not happen.”

Dostum has long experience with mass graves being used in the Afghan political arena. In 1997, he revealed the discovery of mass graves of Taliban members killed by a former ally turned rival, Gen. Abdul Malik Pahlawan, in the Dasht-e Leili desert. The grave sites, which Dostum’s men brought in international journalists to document, helped cement Pahlawan’s exile from the area at the time.

Afghanistan’s attorney general, its top law enforcement official, said that given the bad security conditions in the country it was hard to think about investigating possible war crimes.

“So for the time being, we have put these issues off for the future,” Mohammed Ishaq Aloko said in an interview at his Kabul office.

“I believe that those who committed crimes against humanity will be prosecuted one day,” Aloko said. Just not anytime soon, he said.

This entry was posted in RagBlog and tagged Afghanistan, War Crimes. Bookmark the permalink.