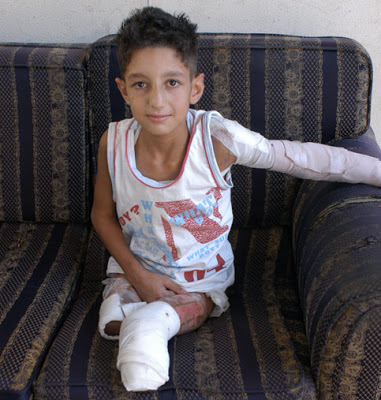 Just a reminder: this is what cluster bomblets do to people.
Cluster Bomb Treaty and The World’s Unfinished Business
By Ramzy Baroud / December 13, 2008

The United States, Russia and China are sending a terrible message to the rest of the world by refusing to take part in the historic signing of a treaty that bans the production and use of cluster bombs. In a world that is plagued by war, military occupation and terrorism, the involvement of the great military powers in signing and ratifying the agreement would have signaled – if even symbolically – the willingness of these countries to spare civilians’ unjustifiable deaths and the lasting scars of war.

Nonetheless, the incessant activism of many conscientious individuals and organizations came to fruition on December 3-4 when ninety-three countries signed a treaty in Oslo, Norway that bans the weapon, which has killed and maimed many thousands of civilians.

The accord was negotiated in May, and should go into effect in six months, once it is ratified by 30 countries. There is little doubt that the treaty will be ratified; in fact, many are eager to be a member of the elite group of 30. Unfortunately, albeit unsurprisingly, the US, Russia, China, Israel, India and Pakistan – a group that includes the biggest makers and users of the weapon – neither attended the Ireland negotiations, nor did they show any interest in signing the agreement.

The US argues that cluster bombs are a legitimate weapon, essential to repel the advancing columns of enemy troops. If such a claim carried an iota of legitimacy, then the weapon’s use should have ended with the end of conventional wars in the mid twentieth century. However, cluster bombs are still heavily utilized in wars fought in or around civilian areas.

Most countries that have signed the accords are not involved in any active military conflict and are not in any way benefiting from the lucrative cluster munition industry. The hope, however is that once a majority of countries, including the Holy See, sign the agreement, the use of the lethal weapon will be greatly stigmatized.

The treaty was the outcome of intensive campaigning by the Cluster Munition Coalition (CMC), a group of non-governmental organizations. CMC is determined to carry on with its campaigning to bring more signatories to the fold.

But without the involvement of the major producers and active users of the weapon, the Oslo ceremony will remain largely symbolic. However, there is nothing symbolic about the pain and bitter losses experienced by the cluster bombs’ many victims. According to the group Handicap International, one-third of cluster-bomb victims are children. Equally alarming, 98 percent of the weapon’s overall victims are civilians. The group estimates that about 100,000 people have been maimed or killed by cluster bombs around the world since 1965.

It certainly is unconscionable that countries who have the chutzpa to impose themselves as the guardians of human rights are the same who rebuff such initiatives and insist on their right to utilize such a killing tool. Unlike conventional weapons, cluster bomblets survive for many years, luring little children with their attractive looks. Children have often mistaken them for candy or toys.

Steve Goose, the arms director of Human Rights Watch described the countries that refused to sign as standing “on the wrong side of history. Some of them are clinging to what is now a widely discredited weapon.”

But there is more to that refusal than clinging onto an outdated military philosophy. The cluster munition industry is thriving. The weapon was used in massive quantities by the US army in Afghanistan, Iraq, Israel in Lebanon and both parties in the S. Ossetia conflict. The British also used it in Iraq, making handsome deals with the weapons’ Israeli manufacturer.

13 year-old Ayat Suliman now lives in Sweden. In an AFP report, she complained, referring to her peers: “Nobody understands me. They all think I’m ugly.” It was on May 5, 2003 that Ayat’s brother came running with what he thought was a dazzling toy. “I remember that it was very colorful and very nice,” said Ayat. The explosion that rocked the little girl’s house in Iraq claimed the lives of her four brothers and cousin, aged 3 to 15. Most of Ayat’s body was burned as a result, and she is still unable to walk independently.

Ahmad Mokaled of the Lebanese town of Nabatieh at the border with Israel was about to celebrate his fifth birthday when he too found a shiny object. Ahmad’s last words, according to his father, who was busily setting up his son’s birthday picnic in a park, were: ‘Dad, Help me.’ He died, but after “four long hours of suffering.”

The tragic stories of Ahmad and Ayat are repeated throughout the world, almost everyday, with some countries paying a much more disproportionate price than others, notably, again, Iraq, Afghanistan and Lebanon.

But neither terrible statistics nor the heart- wrenching personal stories of the many victims seem enough to compel manufactures and active users of the weapon to quit. Countries with sizable military power tend to avoid any entanglement in international law or treaties that limit their flexing or application of their military muscle. The US and Israeli attitudes towards international law carry similar traits, both act as entities above the law, tirelessly infusing ‘national security’ as an excuse for their rebuffing of such international initiatives. It’s also no surprise that the US, Israel, but also Russia refuse to ratify the 1997 Ottawa Treaty, signed by 158 countries – as of 2007 – which prohibits the production, transfer or use of landmines.

Of course, neither the Ottawa nor the Oslo treaties are the exception to the rule as far as Washington’s attitude towards positive international initiatives are concerned. The US under the Bush administration developed a mind-set of animosity towards the rest of the international community, reaching the point of dubbing the UN irrelevant.

Needless to say, CMC, world governments and citizens throughout the world are hoping that the new American administration of Barack Obama will truly bring an end and reverse Bush’s ruinous legacy. Realists say it will take years for an effective change of policy to take place. In the meantime, the millions of unexploded cluster bomblets and landmines scattered the world over, wait for no one. They will continue to claim lives and maim thousands, just like Ahmad of Lebanon, and Ayat of Iraq.

[Ramzy Baroud (www.ramzybaroud.net) is an author and editor of PalestineChronicle.com. His work has been published in many newspapers, journals and anthologies around the world. His latest book is The Second Palestinian Intifada: A Chronicle of a People’s Struggle (Pluto Press, London).]

This entry was posted in RagBlog and tagged U.S. Foreign Policy, War. Bookmark the permalink.

3 Responses to US, Russia, China Refuse to Sign Cluster Treaty