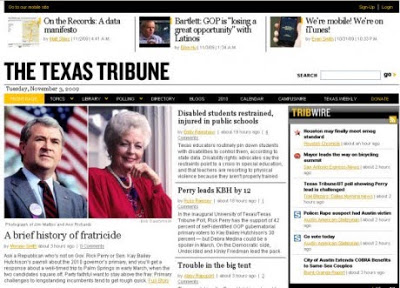 The Tribune mistakes numbers for people and information for insight. It is in no way culturally or regionally idiosyncratic.

Now a month old, The Texas Tribune has had time to show its stuff. Though it was trumpeted before its debut as the end-all of Texas journalism, as a journalist and a Texan, I find it underwhelming and uninspiring.

The digital publication’s strongest suit is that it’s a video game, with streaming this and archived that, and while it may not be as much fun as Grand Theft Auto IV, it’s certainly more clickable than the web pages of other Texas dailies. It has given us polls on everything electoral, and its pages allow us to permutate percentages. Given that virtue, it may soon surpass the Texas Almanac in popular appeal!

Its chief failure is lack of a regional vision. If it is perhaps an admirable statistical publication about Texas — suitable for use in lobby firms and among campaign strategists — it is a poor publication for those Texans whose pursuits are benign. It has no salsa.

The Trib, for example, has given us surveys that allow us to predict whether the voters of Houston, Dallas, Oatmeal, Seadrift and Levelland, will favor Perry over Hutchinson, yet it doesn’t see the overarching, which is that Texas will within a decade be a Hispanic-majority state. The days of Republican hegemony are passing, and any liberal in Texas — the Trib’s managers claim that they are liberals — should be championing the new order to come.

The state’s future is not reflected in the Trib’s staff, which among its dozen reporters includes only one who is Hispanic-surnamed. That’s because the Trib’s executive parentage is not Texan, but what might be called cívica Americana: its key concepts are from Journalism 101, circa 1960, when “Missourian” meant “American.” It is objective, Anglo and staid. Spanish words and phrases are rare in its pages, and even rarer is the hint that today’s Texas politics are a farce — or an ethnic crime. The Trib’s wonks presume that policy-makers are honest, fair-minded and sincere, yet nobody outside the press believes that today.

In the weeks before its debut, the Trib’s backers predicted that the data it would supply might salvage journalism in the state. But most of our dailies haven’t been worth reading since the Gulf of Tonkin incident, when for months Dallas News stories inveighed against the Vietnamese “Reds,” or since August, 1965, when the San Antonio Express described Watts as a “wild Negro neighborhood.” Texas journalism has to be repeopled and remade, not saved — and doing so requires radically new premises.

I saw the Trib’s failings most clearly in its series on the problems of the border. One of its stories detailed the difficulty people have in traveling from there to the state’s interior, a real problem and one that could be solved by reform. But the border is not merely an area of troublesome transit between two nations. It is, in all its aspects, an unhealed scar from the 19th century mugging of Mexico and its descendants. Our problem is not one of walls and checkpoints, it is that either walls or checkpoints were thinkable. Sooner or later, Texas must Mexicanize, and the Trib is not leading the way.

Nor do I see in its coverage any understanding of the historic angst and feistiness of Anglo Texas. Rick Perry and Kay Bailey Hutchinson appear in the Trib’s pages as conservative political candidates, as if the primaries were to be held in Iowa. Like George W., they are instead avatars of Anglo Texans, people whose prominence should make us worry about out fitness for the future.

The Tribune mistakes numbers for people and information for insight. It is in no way culturally or regionally idiosyncratic. It apparently believes that we know our children by their report cards.

[A native Texan, Dick J. Reavis teaches journalism at North Carolina State University. An award-winning journalist, educator and author, Reavis was active with SDS and the New Left in the Sixties. He wrote for Austin’s underground newspaper, The Rag, and later was a senior editor at Texas Monthly magazine. His book, The Ashes of Waco: An Investigation, about the siege and burning of the Branch Davidian compound, was published by Simon and Schuster and may be the definitive work on the subject.]