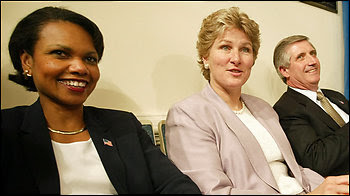 One of the most important changes must be removing criminals (h/t Juan Cole) and proven liars from serious national policy debates, including our commercial airwaves and opinion pages.

On November 4, 2008, the American people demanded change in Washington DC.

One of the most important changes must be excluding felons and proven liars from serious national policy debates, including our commercial airwaves and and opinion pages.

This is not a First Amendment issue because we are not asking Congress or the White House to engage in censorship.

Rather, this is an editorial standards issue. We believe any credible news organization should adopt standards that exclude felons and proven liars.

a. Members of the White House Iraq Group (WHIG), who manufactured pre-war propaganda to defraud Congress and the American people into supporting an invasion of Iraq.

b. Former military officers who promoted Pentagon propaganda to invade Iraq while serving as paid consultants to military contractors who benefited from the invasion of Iraq.

c. Politicians and journalists who knowingly lied about crimes or ethical violations, under oath or on camera.

Senior members of the Bush Administration authorized or failed to stop torture and other war crimes.

This entry was posted in RagBlog and tagged Broadcast Media, Criminal Justice. Bookmark the permalink.