Protesters converge on Houston to say "No New Coal"

Environmental activists from Arkansas, Michigan, Nevada, Georgia, Texas, and Iowa converged on Houston May 14, 2008,to urge the Houston-based Dynegy corporation to halt construction on its six proposed coal plants.

The protest targeted Dynegy’s annual shareholders meeting. Activists gathered outside the meeting to protest and hand out information detailing the dangers of coal and then held a rally nearby featuring short remarks from community activists representing each state. Coal-fired power plants produce around 40% of the U.S.’s CO2 emissions which fuel global warming; and cause 24,000 deaths, 1,000 hospitalizations, and 38,000 heart attacks each year in the U.S. due to the harmful chemicals released. 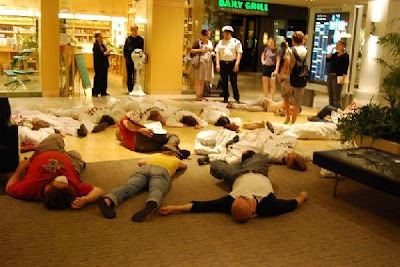