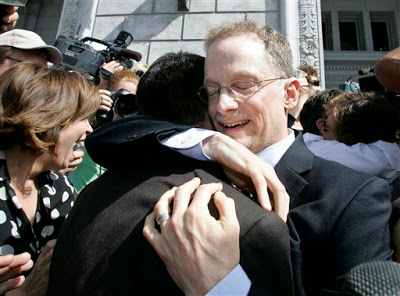 John Lewis, right, hugs his partner, Stuart Gaffney, left, outside of the California State Supreme Court building in San Francisco, Thursday, May 15, 2008, after the California Supreme Court overturned a voter-approved ban on gay marriage in a ruling that allows same-sex couples in the nation’s biggest state to tie the knot. Gaffney and Lewis are one of the main plaintiffs in the case. Photo by Paul Sakuma / AP.

All of you were warned by the religious right it would come to this: if Queers got domestic partnership benefits or civil unions, demands for same sex marriage would be next. The amazing thing about this decision is that it is about equality, which is what the “gay agenda” has been about for the past 25 years. Mayor Gavin Newsom is salivating–he hopes this state referendum will be his ticket to victory in the 2010 Governors race.

Schwarzenegger is also hoping this issue will propel him into the US Senate when he runs against Barbara Boxer–that’s why he’s opposing the referendum. Meanwhile, here in Kook City we can’t help noticing that on the same day equality for Queers became law in CA, Nancy Pelosi blocked war funds in the House of Representatives. It was a good day for the Fox News Networks’ “extreme radical left.”

Today the California Supreme Court took a giant leap to ensure that everybody _ not just in the state of California, but throughout the country _ will have equal treatment under the law,” said City Attorney Dennis Herrera, who argued the case for San Francisco.

The challenge for gay rights advocates, however, is not over.

A coalition of religious and social conservative groups is attempting to put a measure on the November ballot that would enshrine laws banning gay marriage in the state constitution.

The Secretary of State is expected to rule by the end of June whether the sponsors gathered enough signatures to qualify the marriage amendment, similar to ones enacted in 26 other states.

If voters pass the measure in November, it would trump the court’s decision.

California already offers same-sex couples who register as domestic partners the same legal rights and responsibilities as married spouses, including the right to divorce and to sue for child support.

But, “Our state now recognizes that an individual’s capacity to establish a loving and long-term committed relationship with another person and responsibly to care for and raise children does not depend upon the individual’s sexual orientation,” Chief Justice Ron George wrote for the court’s majority.

In a dissenting opinion, Justice Marvin Baxter agreed with many arguments of the majority but said the court overstepped its authority. Changes to marriage laws should be decided by the voters, Baxter wrote.