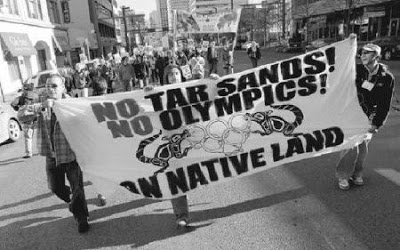 Participants from the Council of Canadians annual general meeting on Saturday march from Veteran’s Park at 102nd Street and MacDonald Drive to the legislature to demand a freeze on new approvals of oilsands expansion. The banner’s reference to Olympic activity on native land refers to land-claim conflicts on the West Coast. Photo: Greg Southam, The Journal

Mike Mercredi is ready to fight what he calls the “slow industrial genocide” that oil companies are waging on the people in his hometown of Fort Chipewyan.

Last year there were over 20 deaths in the community of 1,200 people. Many were cancer-related deaths, which Mercredi said are linked to the oilsands activities in nearby Fort McMurray.

“Let’s put a lid on it and slow things down,” he said. “The graveyard is getting full.”

Mercredi was among the group of 200 activists who marched through downtown to the legislature grounds Saturday afternoon demanding a halt to new approvals for oilsands projects.

As they walked down Jasper Avenue from the Crowne Plaza Hotel, they waved signs and large banners with messages such as “Oil boom, planet doom” and “Crude is rude” while cars drove by and honked in support.

The march was organized by the Council of Canadians who were in Edmonton hosting their annual general meeting.

Supporting the aboriginal residents of Fort Chipewyan who have been impacted by oilsands development were Edmonton-Strathcona MP Linda Duncan, Friends of Medicare executive director David Eggen and members of the local Raging Grannies activist group.

Duncan said the economic downturn provides an opportunity for the federal and provincial governments “to bring people together, figure out a strategy, and figure out how we’re going to consider environment and human health.”

Assembling on the steps of the legislature building, Maude Barlow, the United Nations’ newly appointed water adviser, said oilsands activities need to be slowed down for the sake of future generations.

“This is not a sustainable future, this is a death future. This is a future that rapes from the planet so that we can continue to live a certain lifestyle for a few more years and leave our children with the legacy of a dying planet,” she said.

Barlow clarified that she’s not calling for to end all oilsands activity. Rather, she is rejecting the approval of new projects while recommending a full, environmental assessment to find safer, more sustainable ways of mining energy.

Barlow’s message was the focus of this year’s annual general meeting, which started Friday and ends today.

Laxer said he is advocating for a strategy that would supply Canadians first to develop a strong environmental policy as well as “ensure that Canadians don’t freeze in the dark in an international supply crisis.”

Harden-Donahue argued there would not be jobs lost in the slowing of oilsands activities, but more green jobs available in the renewable resources industry. And Hudema urged workshop attendees to consider the human impact of the oilsands on northern communities such as Fort Chipewyan.

As for Mercredi, he said he would keep fighting to spread the message to slow oilsands development. “When faced with death, you do whatever you can to survive. So I’m going to fight to the end.”

This entry was posted in RagBlog and tagged Canada, Oil Exploration, Political Protest. Bookmark the permalink.