Expert: Nuclear Power Is Too Risky and Expensive 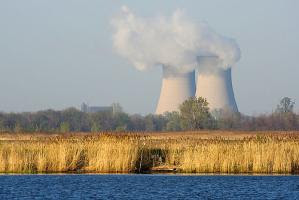 A nuclear power plant on Lake Erie, in Michigan. © mandj98 (flickr)
Nukenomics no longer add up.
By Brittany Schell / October 31, 2008

WASHINGTON — Nuclear power is a risky source of energy that comes with many hidden costs, said an environmental analyst and long-time leader in the U.S. environmental movement Tuesday.

Lester Brown, president of the Earth Policy Institute, said the “flawed economics” of nuclear power are placing unforeseen burdens on taxpayers: the costs related to the construction of nuclear plants, the disposal of nuclear waste, the decommissioning of old plants, and security in case of an accident all contribute to the price the world pays for nuclear power. Wind energy is a more economically sound option, said Brown.

The apparent cost of nuclear power is the cost of construction and fuel for nuclear plants, and this price is rising. The estimated construction cost of a nuclear reactor two years ago was between $2 and $4 billion. Now it is $7 billion, in part because of the rising cost of steel and cement, Brown said.

The price of fuel for nuclear power plants is also on the rise. Uranium now costs $60 per pound, compared to $10 at the beginning of the decade. This increase is due to the depletion of easily mined sites rich in ore, Brown said. Companies now have to dig deeper to find uranium, and the uranium content of the ore has dropped.

Brown said that when calculating the true cost of nuclear power, factors such as waste disposal, insurance in case of an accident, and decommissioning costs once a plant is worn out have to be included.

Brown mentioned the Yucca Mountain nuclear waste repository, where the United States plans to store the radioactive waste from its 104 nuclear reactors, as an example of unforeseen costs of nuclear power. Yucca Mountain is located 90 miles outside of Las Vegas, Nevada. The cost of this repository, estimated at $58 billion in 2001, has climbed to $96 billion.

“Not only is Yucca Mountain over budget, it is 19 years behind schedule,” said Brown. “It was originally supposed to be ready to accept waste in 1998 and it now is scheduled for 2017. It’s not even certain that it will ever be completed.”

The lack of a permanent waste storage facility is a security risk and security costs are usually not included in financial analyses either, said Brown. There are 121 temporary facilities in 39 states, and it is difficult to monitor and provide adequate security for all the sites. He cautioned that this distribution leaves the sites vulnerable to leakage, as well as possible terrorist attacks.

“There is a growing risk of radioactive material getting into the wrong hands,” Brown said. He said there were 250 incidents last year of nuclear material being lost or stolen, and a lot was never recovered.

Another risk of nuclear power, according to Brown, is the danger of another accident like Chernobyl or Three Mile Island. Sandia National Laboratory estimates that a worst-case scenario accident would cost $700 billion, “roughly the size of the fiscal bail out that congress passed a few weeks ago,” said Brown. The cap on liability for U.S. nuclear power plants was set at $10 billion by the government, so in the case of such an accident the excess cost would be born by tax payers.

The cost of decommissioning older nuclear reactors can tip the balance sheet too. Reactors have an average life expectancy of about 40 years. Since the first plant opened in 1954, over 100 reactors have been closed, but many have not completed the decommissioning process, said Brown. According to a 2004 International Atomic Energy Agency report, the decommissioning cost for each reactor will range from $250 to $500 million, not including the cost of removing and disposing of the waste.

A report by nuclear consultant Mycle Schneider said recently that about 90 nuclear reactors are set to close within the next seven years. With only 36 new nuclear reactors under construction worldwide, Brown notes that world nuclear power generation could drop by 10 percent by 2015. With this “aging of the nuclear fleet,” nuclear power generation could hit a sharp decline as more aging reactors close.

“What we’re looking at is a half century of growth being replaced by what could be decades of decline,” said Brown. 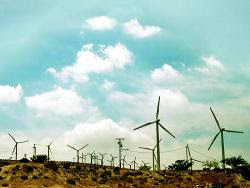 Wind power rising. © Auntie K (Flickr)
In light of this impending decline, Brown said the U.S. government should stop investing money in nuclear power — currently over $70 billion a year — and devote more money to the research and development of renewable energy sources, such as wind.

Comparing nuclear power with wind, Brown pointed out that nuclear power already costs twice as much as electricity produced from the wind, not including the additional costs he cited.

“If we look at the economics comparing nuclear with wind, a dollar invested in wind produces more energy, leads to a greater reduction in carbon emissions, and creates more jobs than one invested in nuclear power,” said Brown.

Environmental research and activist groups, including the Center for American Progress, Greenpeace, and the Worldwatch Institute, are pressing the next administration in Washington to support multibillion-dollar “green jobs” programs to spur the U.S. economy while slowing the onset of global climate change. Each group’s plan calls for a significant increase in government support for renewable energy.

The U.S. Department of Energy released the first national wind resource inventory in 1991, which highlighted the potential of three states — North Dakota, Kansas, and Texas — to satisfy the country’s electricity needs through wind energy. Brown said that since then, wind turbine technology has improved and he estimated that these three states now have enough potential wind energy to satisfy the country’s entire energy needs, not just electricity.

“Wind is the most mature of the renewable energy sources,” said Brown. “Emphasizing the creation of new jobs with investments in renewables and efficiency is the way we want to go.”

This entry was posted in RagBlog and tagged Alternative Energy, Environment, Nuclear Power. Bookmark the permalink.

3 Responses to Expert: Nuclear Power Is Too Risky and Expensive