Rabbi Arthur Waskow : Fort Hood and the Prophetic ‘IF’ 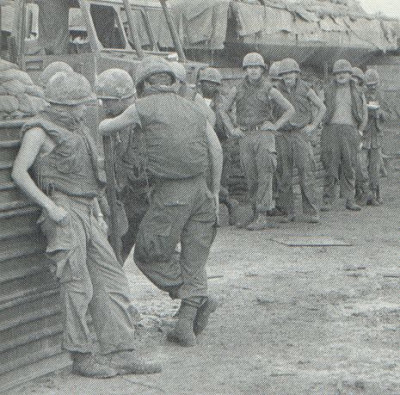 These battle-weary troops from the 1st Air Cav had just staged a “combat refusal” at the PACE firebase in Vietnam. There were also countless instances of “fragging” against officers by Vietnam GI’s. Photo from NAM – The Story of the Vietnam War (Issue 8).
How will the community respond?
Fort Hood and the Prophetic ‘IF’

One reader wrote me to ask: “What effect will the Ft. Hood shootings have on the American public’s perception of Islam?” That question asks us to be foretellers, fortune tellers, to predict. But The Shalom Center has had the holy chutzpah to call ourselves a “prophetic voice,” and that voice is about “forth-telling,” not foretelling. About “If,” not “will.”

The Prophets spoke always with an “if” — “IF the community chooses to oppress its workers into slaves, then the owners will themselves become slaves to Babylonia; IF the slave-owners will free their slaves, they will be freed from the yoke of Babylonia.” (That was Jeremiah, as the Babylonian Army besieged Jerusalem, speaking forth a challenge, at once a warning and a promise, to the conventional practices and power structures of his society.)

From that perspective, the Prophetic question today should be a challenge to power and convention: “What effect should the Ft. Hood shootings have on the American public’s perception of the Afghanistan War?”

For anyone who lived through the Vietnam War, Fort Hood recalls the epidemic of “fragging” late in the war — that is, enlisted men throwing fragmentation bombs at the officers who were ordering them into hopeless, senseless battle.

In Fort Hood, if the reports and claims from the police and military are correct (we already know that a number of falsehoods were reported as facts), an officer, a physician, trained to heal traumatized people from the maiming of their souls, was refused an exit from the soul-destroying prison he begged to leave.

One of the reasons that “fragging” came near the end of the Vietnam War is that the epidemic of fragging signaled to the higher officer corps that they had better end the war. Coming on top of more and more evidence that the U.S. and NATO military presence in Afghanistan is itself multiplying the violent resistance it claims to suppress, the Fort Hood murders should signal the American public and its military and civilian leadership to take off the hoods we have put over our own eyes, see the truth, and take our soldiers out from Afghanistan.

If — IF, the Prophetic word — If we seriously want to help grow a grassroots democracy there, we might send teams of women from American community banks to provide grassroots microloans to those who are prepared to use them, especially including women, while abandoning the self-destructive effort to impose democracy with Predators. Then Fort Hood might help Americans grow into a new relationship with the hundreds of millions of Muslims who seek to shape their own futures in peace.

IF instead the American public chooses to define Fort Hood as proof that Islam is a world of hatred, then the cage of violence that some Muslims, some Christians, some Jews, some Hindus are helping build will clang shut upon us all .

3 Responses to Rabbi Arthur Waskow : Fort Hood and the Prophetic ‘IF’