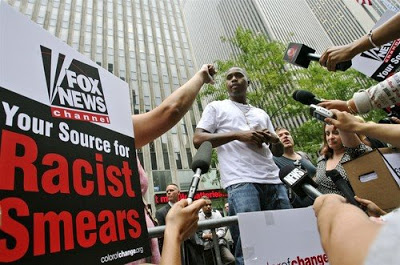 The other day I signed a MoveOn.org petition protesting racism in reporting on the Obamas by FOX News. All in a day’s work.

But MoveOn was nice enough to report back to me with a play-by-play account of my signature’s epic journey – from my humble computer; to Kinko’s, where it was printed out; to rapper Nas, who gave a speech; to FOX News headquarters, where it was refused; and to the Colbert Report, where it and 199,000 others were presented to Colbert Nation.

Nice of them to keep me informed. (Watch the videos below.)

Big news! Your petition signature telling FOX to stop their racist smears against the Obamas had a really exciting day on Wednesday. Here’s what happened:

2:00 p.m. The signatures were piled in front of FOX’s national headquarters at 6th Avenue and 48th Street.

3:15 p.m. Hip hop star Nas (whose new album had just risen to #1 on the Billboard charts hours earlier) joined over 100 activists and delivered the petitions to FOX on behalf of ColorOfChange, MoveOn, and Brave New Films.

11:30 p.m. Stephen Colbert welcomed Nas as his guest on the Colbert Report and dedicated over half of his show to FOX’s racism. The boxes containing our signatures were stacked prominently on Colbert’s set in place of his normal interview table and chairs—and he conducted the entire interview surrounded by petitions! Then, Nas performed his new song “Sly Fox,” which is all about FOX’s racism.

12:00 a.m. Several MoveOn staffers, jaws dropped open, got on the phone and engaged in several rounds of, “Wow!” 🙂

Since then, the news has kept spreading around the world. You sent a message to FOX, and that message was very much received!

And the fight’s not over. Together, we’ve denied FOX the legitimacy that would come by hosting Democratic presidential debates, and we got a company to stop advertising on Bill O’Reilly. This week’s delivery made an impact, and we’ll continue to push back together against FOX’s racism and their smears against Obama.

Colbert Report: Nas responds to Bill O’Reilly like the gangsta that he is — with a petition.