I originally posted this article with the headline ‘Ralph Nader calls Obama “Uncle Tom.”‘ This was inaccurate; it did not correctly reflect Nader’s words. Nader actually said, “His choice, basically, is whether he’s going to be Uncle Sam for the people of this country or Uncle Tom for the giant corporations.”

However, even when placed in this context, I believe Nader’s comments to have been jarringly inappropriate. The social usage of the term “Uncle Tom” has always been explicitly or implicitly racist and it is certainly out of line when uttered by a white man.

Which is not to say that Nader’s speculation about what role Obama will play in relation to the corporate domination of America is inappropriate. That is a question we are duty-bound to ask of Barack Obama throughout his presidency.

Ralph Nader, a man whose historical credentials as a social critic are impeccable, continues to have an astute analysis of the problems confronting America. But he has become essentially tone deaf and, to this observer, greatly functions as an obstacle to the basic social change he so correctly demands. 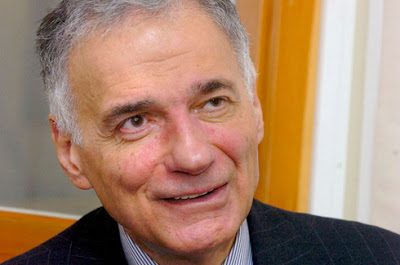 ‘It’s a stunning bit of television and a lot of people missed it.’
By Tim Goodman / November 5, 2008

See Video of Nader on FOX News, Below.

As if Ralph Nader wasn’t a big enough tool already, he went on Fox News on election night – the very night Barack Obama broke the racial barrier on the presidency – and uttered the words “Uncle Tom.” Not only that, after being called out on the words (which he initially said in a radio interview) by Fox News anchor Shepard Smith – and given a point-blank chance to apologize and take them back, Nader said he wouldn’t.

It’s a stunning bit of television and a lot of people missed it. (No doubt a good portion of the Bay Area, not exactly a bastion of Fox News watchers, did).

Up until he spewed out the words, the biggest shocker in this scenario was A) That anybody still cared enough to talk to a washed-up political hack like Nader and B) That Nader could actually hear Smith call him on the offensive language. Nader rarely stops his mouth moving – he’s always so caught up in his monotonous blather and meritless belief that he’s making points people want to listen to.

Give Shep Smith a lot of credit here. “Really? Ralph Nader – what was that?” And then he just fried Nader. (I love the look on his face when Nader calls him a bully – it’s that same look people should be giving Nader right about now for completely not getting it.)

So, let’s go to the big board here for the tally: Nader helps the Democrats lose the election in 2000 and then slanders the Democratic winner in 2008? Well played, Ralph. At least this moment brings you (temporarily) back out of obscurity and irrelevance.