Real Unemployment Rate : Closing in on the Great Depression 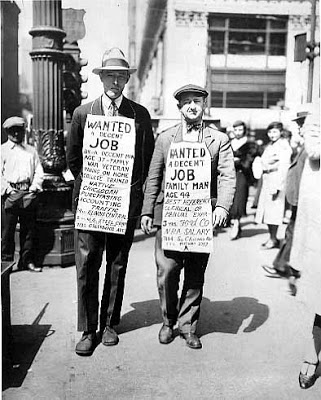 Good times around the corner?
Real unemployment rate at 17.5 percent

This economic disaster was created by far too many years of Reagan-Bush-supply-side-trickle-down-union-busting-corporate-welfare-market-driven economic policy.

Yes, I know the federal government says the unemployment rate is now 10.2% — up from 9.8% after the country suffered a net loss of another 190,000 jobs in October. And that is a very scary figure in itself. After all, it shows nearly 16 million Americans are out of work.

But those are the “adjusted” figures the federal government uses to keep the American people from knowing just how bad unemployment really is in this country. When you add in the number of people who have given up trying to find a job and the people who have accepted part-time work because they can’t find a full-time job, you get much closer to the REAL unemployment rate.

The sad fact is that the real unemployment rate is now at least 17.5%. That means more than one out of every six workers in this country cannot find a full-time job.

Folks, that’s rapidly approaching the unemployment figures from the Great Depression, when the rate of unemployment climbed over 20%. And the government admits that the rate will continue to climb over the next several months (and probably longer). It is within the realm of possibility that we’ll reach those Great Depression numbers.

What bothers me is that the government and private economic pundits are currently trying to convince Americans that better times are just around the corner. They tell us the recession is actually over (because one quarter of GDP showed some growth). Then they assure us that unemployment is just a lagging indicator and will turn around in a few months as the economy continues to grow.

I wish I could believe that, but I don’t. All of the jobs were not lost due to the poor economy. Some of those jobs were cut so the companies could show a short-term gain and drive up their stocks — making millions for executives and investors. Many other good-paying jobs have been shipped overseas where the companies can exploit low-wage workers. None of these jobs are coming back, regardless of how much the economy rebounds. 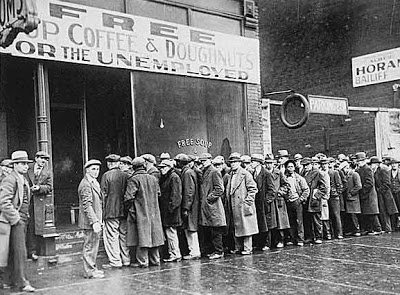 Around 70% of the GDP (Gross Domestic Product) figure depends on consumer buying in this country. With the job losses continuing to rise each month in this country, fewer people each month will have money to spend. Those who still are working will also close their pocketbooks even tighter because the tanking economy scares them.

Even when the economy does start producing jobs instead of losing them, what kind of jobs will they be? Will they be good-paying jobs with benefits, or minimum wage jobs with no benefits? There is no shame in flipping burgers, but you certainly can’t buy food, make house payments and pay for a car with that kind of job.

Political pundits are now saying that if the economy and jobs don’t turn around before the next election, it will be blamed on the Democrats because they are in power. That’s probably true, even though it may be unfair.

Lest we forget, this mess wasn’t created by the Democrats. This economic disaster was created by far too many years of Reagan-Bush-supply-side-trickle-down-union-busting-corporate-welfare-market-driven economic policy. The elder Bush was right when he called it “voodoo economics” (before he sold out and went along with it).

The truth is that the recession is not over. It won’t be over until the economy starts producing good jobs. But fasten your seat belts, because that’s a long way down a very bumpy road.

17 Responses to Real Unemployment Rate : Closing in on the Great Depression