Rep. Clyburn and the Question of Sabotage 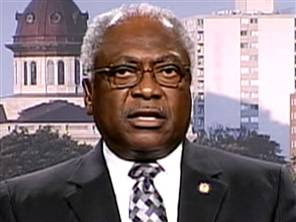 “I was sharing with the reporter the things that have been said to me,” the South Carolina Democrat told Keith Olbermann on MSNBC.

Clyburn, an undeclared delegate and the highest-ranking African-American in Congress, was quoted in a recent Reuters article saying, “There are African-Americans who have reached the decision that the Clintons know that she can’t win this. But they’re hell-bound to make it impossible for Obama to win.”

“I’m not saying anything that people aren’t saying among themselves, and many of them are saying it to me,” Clyburn said on MSNBC. “”That’s all I was saying, that people are saying this. I think it’s a great concern,” adding that he isn’t among those who believe that Hillary Clinton is trying to sabotage the party.

Clyburn also made remarks to the New York Times, calling Bill Clinton’s conduct “bizarre.” Clyburn said the former president’s conduct in this campaign had caused what the newspaper described as possibly being an “irreparable breach between Mr. Clinton and an African-American constituency that once revered him.”

On MSNBC, Clyburn said that this is something he’s been saying since the beginning of the year, when Clinton seemed to be the front-runner.

“I said [this] in January, when we had the debate down at Myrtle Beach, South Carolina, that ‘Bill Clinton needs to chill out.’” he said. “That was in January. At that point, everybody thought that this thing would be over on Super Tuesday and that the leading candidate for the nomination would be Hillary Clinton. That’s certainly what I thought. And even then, I thought the president was saying things that would anger black voters. Now we are down almost into May and I’m saying the same thing. The only difference is that this time there’s another person that’s in the lead who happens to be African American.”

Clyburn urged Democrats to consider the good of the party. “We’re in a very critical point in this process and if we’re not careful, we could do irreparable harm. We’re trying to do something that’s never been done in this country before.”