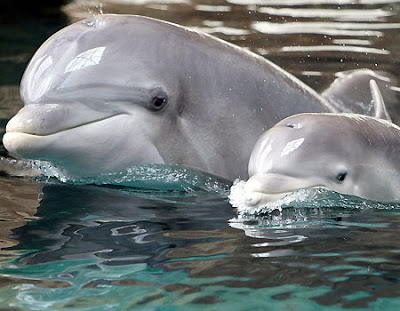 
‘The neuroanatomy suggests psychological continuity between humans and dolphins and has profound implications for the ethics of human-dolphin interactions.’ — Lori Marino, zoologist

Dolphins have been declared the world’s second most intelligent creatures after humans, with scientists suggesting they are so bright that they should be treated as “non-human persons.”

Studies into dolphin behavior have highlighted how similar their communications are to those of humans and that they are brighter than chimpanzees. These have been backed up by anatomical research showing that dolphin brains have many key features associated with high intelligence.

The researchers argue that their work shows it is morally unacceptable to keep such intelligent animals in amusement parks or to kill them for food or by accident when fishing. Some 300,000 whales, dolphins and porpoises die in this way each year.

“Many dolphin brains are larger than our own and second in mass only to the human brain when corrected for body size,” said Lori Marino, a zoologist at Emory University in Atlanta, Georgia, who has used magnetic resonance imaging scans to map the brains of dolphin species and compare them with those of primates.

“The neuroanatomy suggests psychological continuity between humans and dolphins and has profound implications for the ethics of human-dolphin interactions,” she added.

Dolphins have long been recognized as among the most intelligent of animals but many researchers had placed them below chimps, which some studies have found can reach the intelligence levels of three-year-old children. Recently, however, a series of behavioral studies has suggested that dolphins, especially species such as the bottlenose, could be the brighter of the two. The studies show how dolphins have distinct personalities, a strong sense of self and can think about the future.

It has also become clear that they are “cultural” animals, meaning that new types of behaviour can quickly be picked up by one dolphin from another.

In one study, Diana Reiss, professor of psychology at Hunter College, City University of New York, showed that bottlenose dolphins could recognize themselves in a mirror and use it to inspect various parts of their bodies, an ability that had been thought limited to humans and great apes.

In another, she found that captive animals also had the ability to learn a rudimentary symbol-based language.

Other research has shown dolphins can solve difficult problems, while those living in the wild co-operate in ways that imply complex social structures and a high level of emotional sophistication.

In one recent case, a dolphin rescued from the wild was taught to tail-walk while recuperating for three weeks in a dolphinarium in Australia.

After she was released, scientists were astonished to see the trick spreading among wild dolphins who had learned it from the former captive.

There are many similar examples, such as the way dolphins living off Western Australia learnt to hold sponges over their snouts to protect themselves when searching for spiny fish on the ocean floor.

Such observations, along with others showing, for example, how dolphins could co-operate with military precision to round up shoals of fish to eat, have prompted questions about the brain structures that must underlie them.

Size is only one factor. Researchers have found that brain size varies hugely from around 7oz for smaller cetacean species such as the Ganges River dolphin to more than 19lb for sperm whales, whose brains are the largest on the planet. Human brains, by contrast, range from 2lb-4lb, while a chimp’s brain is about 12oz.

When it comes to intelligence, however, brain size is less important than its size relative to the body.

What Marino and her colleagues found was that the cerebral cortex and neocortex of bottlenose dolphins were so large that “the anatomical ratios that assess cognitive capacity place it second only to the human brain”. They also found that the brain cortex of dolphins such as the bottlenose had the same convoluted folds that are strongly linked with human intelligence.

Such folds increase the volume of the cortex and the ability of brain cells to interconnect with each other. “Despite evolving along a different neuroanatomical trajectory to humans, cetacean brains have several features that are correlated with complex intelligence,” Marino said.

Marino and Reiss will present their findings at a conference in San Diego, California, next month, concluding that the new evidence about dolphin intelligence makes it morally repugnant to mistreat them.

Thomas White, professor of ethics at Loyola Marymount University, Los Angeles, who has written a series of academic studies suggesting dolphins should have rights, will speak at the same conference.

“The scientific research . . . suggests that dolphins are ‘non-human persons’ who qualify for moral standing as individuals,” he said.

[This article was first published in The Sunday Times of London, on January 3, 2110. Additional reporting by Helen Brooks.]