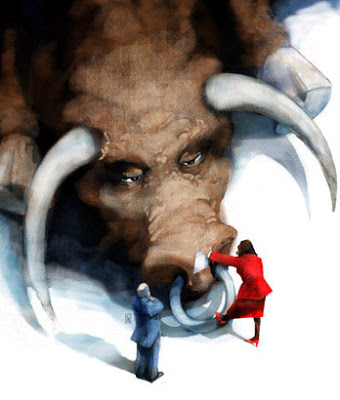 It’s no secret to anyone what kicked off the current recession in America. It was the financial industry and Wall Street that were so greedy that they were willing to throw the entire country under the bus as long as they could keep making their fees and bonuses. They were so concerned with making their own money they even put their own companies at risk to make a fast buck.

Of course, this couldn’t go on forever. Wall Street had convinced Americans that rules were in place that would prevent a financial meltdown like what happened in 1929 and led to the Great Depression. To hear them talk, land and housing values would keep rising forever, the stock market could not bottom out and lose billions of dollars, and the financial industry was too big and smart to fail. None of that was true.

Their greed finally caught up with them. Some companies folded (like Lehman Bros.) and others would have folded if they hadn’t been bailed out by Republican President George Bush creating a $700 billion bailout to keep them afloat. This huge failure by Wall Street banks, brokerages and insurance companies led us into the worst recession since the 1930s. Over 12 million jobs were lost and the economy’s failure was felt in every state and city throughout the country.

After the $700 billion of taxpayer money was pumped into Wall Street, they are now back to their old ways. The stock market is going up, outrageous salaries and bonuses are being paid to the executives, and we are probably well on our way to another financial meltdown in the future because nothing has been changed. And that seems to be the way Wall Street wants it, because they’re pumping over a million dollars a day into lobbying against any changes or new regulations.

But the American people know better. They know that changes on Wall Street must be made and the financial industry must be more closely regulated, because they have shown that they are clearly incapable of controlling their own greed or policing their own industry. This is even true of the teabaggers. While it is true that they are unhappy with government, they are equally unhappy with Wall Street and unhappy that while the financial companies have recovered, ordinary Americans are still mired in the recession.

That’s why I am so puzzled that congressional Republicans are now siding with Wall Street against the ordinary citizens on Main Street. President Obama is trying to get some new regulations passed to rein in some of the most egregious abuses on Wall Street. I think he should do even more than he is proposing, but his proposals will make a good start and bring at least a modicum of sanity back to Wall Street.

But the president may be unable to get his new financial regulations through Congress. This is because the Republicans have decided they are against any reform of Wall Street. That should tell any observer where most of that lobbyist money is going.

Senator Chris Dodd (D-Connecticut) is chairman of the Senate Banking Committee and one of those pushing for new regulations on the financial industry. However, he has received a letter from the Senate Minority Leader (who receives more funds from Wall Street than any other senator) telling him that the Republicans have 41 votes to oppose regulating the financial industry. In fact, he claims they can even prevent Democrats from debating financial reform.

The health care reform is old news, and the more people learn about it, the more they will like it — or at least accept it. The next election will be fought over the economy, and the bill that will be freshest in the minds of voters will be the effort to regulate Wall Street and rein in some of their greed. They are not going to be happy with the protectors of Wall Street.

THE REPUBLICANS HAVE CHOSEN WALL STREET OVER MAIN STREET!!!