Republicans on Health Care : The Gift That Keeps on Giving 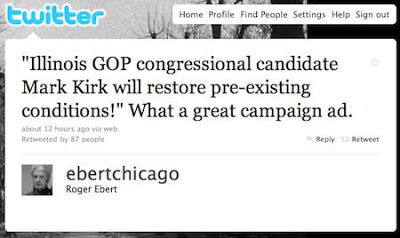 Health care reform is now law, and in a few more days the reconciliation bill will pass and be signed into law to make that reform even better (although not perfect). There is more to be done, but I don’t want to minimize what has been accomplished. Many millions will be helped by this new law, and those who fought for it have good reason to celebrate.

But there are those who spent all their political capital to try and stop health care reform, and today their hopes are in shambles — mainly Republicans, especially those on the far right like the teabaggers. They are pinning their fading hopes on the hollow assumption that the American public will be so outraged by the new law that they will once again return the defeated Republicans to power.

Many on the far right are now saying they will repeal the new health care reform law, and they are counting on the November elections to give them the power to do that. In fact, the queen of right-wing insanity in the House of Representatives, Michele Bachmann, has already filed a bill to repeal the new law. And soon, Senator Jim DeMint will introduce similar legislation in the Senate.

Both of them know they have no chance to pass this legislation. What they are really trying to do is keep their teabagging followers engaged in the politics of denial until November, in the hopes they will go to the polls in droves and elect right-wing Republicans. And I don’t doubt they will re-elect some and elect a few new ones. It is a peculiarity of American politics that the party out of power will pick up seats in an off-year election, and that will probably happen.

But I seriously doubt they will pick up enough to challenge Democratic power in either the House or the Senate. One reason is that as the public learns more about the health care reform, they will like it (or at least most of it). They will realize that the new law changes things for the better. And the more that people understand the intricacies of the new law, the more unhappy they will be with those who tried to stop it — the Republicans.

Let us assume the worst case scenario — that the Republicans somehow take control of both the House and Senate. I don’t think that can happen, but if it did, can they then repeal health care reform? Again, no. They will still have a Democrat in the White House who will not sign any kind of repeal legislation. That means they would need not just a majority, but a two-thirds majority to repeal. Even the Republicans don’t expect to do that good in November.

But there is another much better reason not to repeal the law. And all but the nuts on the right-wing fringe are very aware of this. What politician of either party is going to tell the American public the following:

If the Republicans repeal the new law, that is what they would be saying to the American people. I think most politicians, even Republicans, know it would be political suicide to take back these things. A huge majority, even of those generally opposed to some aspects of the reform, knew these things needed to happen, and they are not about to let any politician take them away now.

Although there were many people who didn’t think the new law was exactly what was needed, there was never a majority of the people opposed to health care reform. That was just the teabaggers, and according to a recent poll, they only make up about 16% of the population. The other 84% knew that some kind of health care reform was needed. Now that it has been passed, they will not be willing to go backwards and give it up.

The river has been crossed, and there’s no going back now. The health care law can, and probably will, be amended and improved, but it will not be repealed. And if the Republicans don’t climb on board pretty soon, they will find themselves even further marginalized.

I hope the Republicans do campaign on repealing the health care reform law in 2012, because that would be disastrous for them. By then, the American public will understand the reform much better, especially the parts that apply to them — and most Americans will be positively affected by the new law.

So bring on the repeal efforts Republicans. It would be a gift for Democrats.

5 Responses to Republicans on Health Care : The Gift That Keeps on Giving