These guys just won’t quit, eh? Republicans surely are the most insecure, fucked-up group of people on Earth. Mr. Broun’s remarks say much more about him than they do about Barack Obama or the President-Elect’s policies. 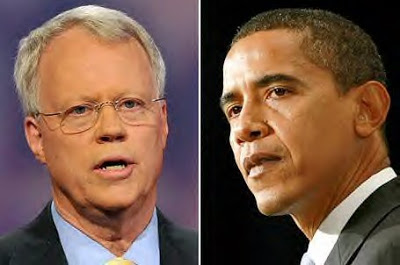 WASHINGTON – A Republican congressman from Georgia said Monday he fears that President-elect Obama will establish a Gestapo-like security force to impose a Marxist dictatorship.

“It may sound a bit crazy and off base, but the thing is, he’s the one who proposed this national security force,” Rep. Paul Broun said of Obama in an interview Monday with The Associated Press. “I’m just trying to bring attention to the fact that we may — may not, I hope not — but we may have a problem with that type of philosophy of radical socialism or Marxism.”

Broun cited a July speech by Obama that has circulated on the Internet in which the then-Democratic presidential candidate called for a civilian force to take some of the national security burden off the military.

“That’s exactly what Hitler did in Nazi Germany and it’s exactly what the Soviet Union did,” Broun said. “When he’s proposing to have a national security force that’s answering to him, that is as strong as the U.S. military, he’s showing me signs of being Marxist.”

Obama’s comments about a national security force came during a speech in Colorado in which he called for expanding the nation’s foreign service.

“We cannot continue to rely only on our military in order to achieve the national security objectives that we’ve set,” Obama said in July. “We’ve got to have a civilian national security force that’s just as powerful, just as strong, just as well-funded.”

The Obama transition team declined to comment on Broun’s remarks. But spokesman Tommy Vietor said Obama was referring in the speech to a proposal for a civilian reserve corps that could handle postwar reconstruction efforts such as rebuilding infrastructure — an idea endorsed by the Bush administration.

Broun said he believes Obama would move to ban gun ownership if he does build a national security force.

Obama has said he respects the Second Amendment right to bear arms and favors “common sense” gun laws. Gun rights advocates interpret that as meaning he’ll at least enact curbs on ownership of assault weapons and concealed weapons. As an Illinois state lawmaker, Obama supported a ban on semiautomatic weapons and tighter restrictions on firearms generally.

“We can’t be lulled into complacency,” Broun said. “You have to remember that Adolf Hitler was elected in a democratic Germany. I’m not comparing him to Adolf Hitler. What I’m saying is there is the potential of going down that road.”

This entry was posted in RagBlog and tagged Barack Obama, Republican Right. Bookmark the permalink.