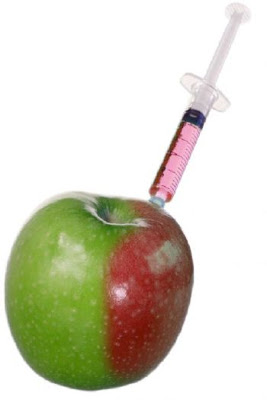 Focus On The Corporation: The Genetically Modified Food Gamble
by Robert Weissman

There have been few experiments as reckless, over-hyped, and with as little potential upside as the rapid rollout of genetically modified crops. The International Service for the Acquisition of Agri-biotech Applications (ISAAA), a pro-biotech nonprofit, released a report [in February 2008] highlighting the proliferation of genetically modified crops. According to ISAAA, biotech crop area grew 12 percent, or 12.3 million hectares, to reach 114.3 million hectares in 2007, the second highest area increase in the past five years.

For the biotech backers, this is cause to celebrate. They claim that biotech helps farmers. They say it promises to reduce hunger and poverty in developing countries. “If we are to achieve the Millennium Development Goals (MDGs) of cutting hunger and poverty in half by 2015,” says Clive James, ISAAA founder and the author of the just-released report, “biotech crops must play an even bigger role in the next decade.”

For all of the industry hype around biotech products, virtually all planted genetically modified seed is for only four products–soy, corn, cotton, and canola–with just two engineered traits. Most of the crops are engineered to be resistant to glyphosate, an herbicide sold by Monsanto under the brand-name RoundUp (these biotech seeds are known as RoundUp-Ready). Others are engineered to include a naturally occurring pesticide, Bt.

Most of the genetically modified crops in developing countries are soy, says Bill Freese, science policy analyst at the Center for Food Safety and co-author of “Who Benefits from GM Crops?,” a report issued at the same time as ISAAA’s release. These crops are exported to rich countries, primarily as animal feed. They do absolutely nothing to supply food to the hungry.

As used in developing countries, biotech crops are shifting power away from small, poor farmers desperately trying to eke out livelihoods and maintain their land tenure. Glyphosate-resistance is supposed to enable earlier and less frequent spraying, but, concludes “Who Benefits from GM Crops?,” these biotech seeds “allow farmers to spray a particular herbicide more frequently and indiscriminately without fear of damaging the crop.” This requires expenditures beyond the means of small farmers–but reduces labor costs, a major benefit for industrial farms.

ISAAA contends that Bt planting in India and China has substantially reduced insecticide spraying, which it advances as the primary benefit of biotech crops.

Bt crops may offer initial reductions in required spraying, says Freese, but Bt is only effective against some pests, meaning farmers may have to use pesticides to prevent other insects from eating their crops. Focusing on a district in Punjab, “Who Benefits from GM Crops?” shows how secondary pest problems have offset whatever gains Bt crops might offer. Freese also notes that evidence is starting to come in to support longstanding fears that genetically engineering the Bt trait into crops would give rise to Bt-resistant pests.

The biotech seeds are themselves expensive, and must be purchased anew every year. Industry leader Monsanto is infamous for suing farmers for the age-old practice of saving seeds, and holds that it is illegal for farmers even to save genetically engineered seeds that have blown onto their fields from neighboring farms. “That has nothing to do with feeding the hungry,” or helping the poorest of the poor, says Hope Shand, research director for the ETC Group, an ardent biotech opponent. It is, to say the least, not exactly a farmer-friendly approach.

Although the industry and its allies tout the benefits that biotech may yield someday for the poor, “We have yet to see genetically modified food that is cheaper, more nutritious, or tastes better,” says Shand. “Biotech seeds have not been shown to be scientifically or socially useful,” although they have been useful for the profit-driven interests of Monsanto, she says. Freese notes that the industry has been promising gains for the poor for a decade and a half–but hasn’t delivered. Products in the pipeline won’t change that, he says, with the industry focused on introducing new herbicide resistant seeds.

The evidence on yields for the biotech crops is ambiguous, but there is good reason to believe yields have actually dropped. ISAAA’s Clive James says that Bt crops in India and China have improved yields somewhat. “Who Benefits from GM Crops” carefully reviews this claim, and offers a convincing rebuttal. The report emphasizes the multiple factors that affect yield, and notes that Bt and RoundUp-Ready seeds alike are not engineered to improve yield per se, just to protect against certain predators or for resistance to herbicide spraying.

Beyond the social disaster of contributing to land concentration and displacement of small farmers, a range of serious ecological and sustainability problems with biotech crops is already emerging–even though the biotech crop experiment remains quite new. Strong evidence of pesticide resistance is rapidly accumulating, meaning that farmers will have to spray more chemicals to less effect. Pesticide use is rising rapidly in biotech-heavy countries. In the heaviest user of biotech seeds–the United States, which has half of all biotech seed planting– glyphosate-resistant weeds are proliferating. Glyphosate use in the United States rose by 15 times from 1994 to 2005, according to “Who Benefits from GM Crops,” and use of other and more toxic herbicides is rapidly rising. The US experience likely foreshadows what is to come for other countries more recently adopting biotech crops.

Seed diversity is dropping, as Monsanto and its allies aim to eliminate seed saving, and development of new crop varieties is slowing. Contamination from neighboring fields using genetically modified seeds can destroy farmers’ ability to maintain biotech-free crops. Reliance on a narrow range of seed varieties makes the food system very vulnerable, especially because of the visible problems with the biotech seeds now in such widespread use.

For all the uncertainties about the long-term effects of biotech crops and food, one might imagine that there were huge, identifiable short-term benefits. But one would be wrong. Instead, a narrowly based industry has managed to impose a risky technology with short-term negatives and potentially dramatic downsides.

But while it is true, as ISAAA happily reports, that biotech planting is rapidly growing, it remains heavily concentrated in just a few countries: the United States, Argentina, Brazil, Canada, India, and China. Europe and most of the developing world continue to resist Monsanto’s seed imperialism. The industry and its allies decry this stand as a senseless response to fear-mongering. It actually reflects a rational assessment of demonstrated costs and benefits — and an appreciation for real but incalculable risks of toying with the very nature of nature.

This entry was posted in RagBlog and tagged Capitalism, Environment. Bookmark the permalink.