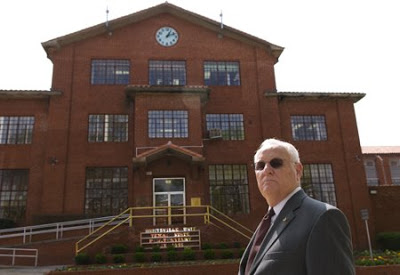 Reverend Carroll Pickett was the death-house chaplain at the Walls prison unit in Huntsville, Texas for 13 years. During his tenure, he ministered to 95 inmates executed by lethal injection.

Because he was employed by the state, Pickett was unable to voice his disapproval of capitol punishment while performing his ministry. But he has become an opponent of the death penalty since leaving the prison system.

Pickett co-authored a memoir with Carlton Stowers, titled Within These Walls. He is now the subject of a new documentary, At the Death House Door.

Also see Death row chaplain has change of heart / Austin Chronicle.
And David Lee Powell and the Question of “Closure” by Mariann Wizard / The Rag Blog