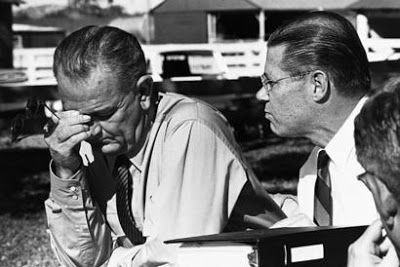 LBJ and Robert McNamara. Photo from Dr. X’s Vintage Photos.
The hallmark of the McNamara era:

The most critical contribution to U.S. imperialism… for which McNamara was a leading advocate, was to foster the belief and promote the ideology that the United States model of economic and political development could transform the world.

The blogosphere is already churning up demonic imagery of former Secretary of Defense Robert McNamara, who served Presidents Kennedy and Johnson in the era of the Vietnam War. Others are reminded of the tragic Robert McNamara, portrayed in the recent documentary of his life, “The Fog of War.”

Rather than condemn or express empathy for the man, it is important for peace activists to reflect on his contributions to United States foreign policy in the context of United States imperialism.

McNamara was plucked from his leadership role in the Ford Motor Company by the new President John Kennedy. As someone trained in administration, the still new scientific management, McNamara was seen as a talented young man able to help institutionalize Kennedy’s vision of a new U.S. global and capitalist hegemony.

As the 1960s dawned, the new president, his key advisors, and far-sighted representatives of burgeoning multinational corporations saw the need for expanding access to markets, resources, cheap labor, and investment opportunities in the face of growing support in poor countries for Communist models of growth. The outgoing Eisenhower administration had been slow to expand U.S. military power and to develop a model of economic and political development that newly independent peoples would embrace as an alternative to Communism.

In that historical context, McNamara served skillfully as a policymaker pursuing the 1960s goals of U.S. global capitalism. As to global vision, articulated purpose, “theory,” McNamara and his colleagues promoted policies of “economic development” and “modernization.”

Borrowing liberally from another, Kennedy advisor Walt Rostow, the new administration launched a program to stimulate a “non-Communist” path to economic development. What the Kennedy team claimed, and probably believed, was that if newly independent countries in Africa and Asia, and neocolonial countries in Latin America embraced policies promoting markets, trade, expanding the “middle class,” modest democratization, and the celebration of science the way Europe and North America did over the last 500 years, they would experience a political and economic development that would satisfy their citizens and would resemble the United States course as well. For Rostow, the processes of economic and political development in the direction of market democracies would occur naturally if the “Communists” were prohibited from interfering with this historical evolution.

Here is where an expanded U.S. military capability was needed. The United States, the Kennedy team believed, needed to develop the technologies, the personnel, and the training to forestall “Communist” expansion in the Global South, at the same time that the United States would deter communist enemies-the Soviet Union and China-from attacking the U.S. or its allies.

(Heretofore, DOD allocation of resources for social scientific research was more narrowly provided for those doing studies about making propaganda more effective or fighting “the appeals of communism.” Some of this work had been funded by the CIA but not DOD).

Additional research investment was geared to the development of new kinds of military tactics such as how to more effectively develop the capacity for “counter-insurgency’ capabilities. Finally, other DOD research dollars were channeled into the development of new military technologies; guns that could shoot around corners, electronic fences, and other gadgetry that could be used in counter-insurgency campaigns.

The most critical contribution to U.S. imperialism coming out of these new DOD programs, for which McNamara was a leading advocate, was to foster the belief and promote the ideology that the United States model of economic and political development could transform the world. If other peoples were reluctant to embrace it, the United States would use its technical advisors and military capabilities to impose this form of modernization.

When McNamara assumed the leadership of the Pentagon, he found much resistance to change. The officer core was suspicious of the new civilian undersecretaries, the new tactics derived from academic studies, and to some degree the dramatic increase in defense dollars channeled to new programs. While the Eisenhower administration increased military spending in the 1950s over the early post-World War II, the president, himself, had insisted on capping such spending at about $45 billion (in 1950s terms).

When Eisenhower gave his famous warning of the expansion in American society of a “military-industrial complex” in 1960, he was standing against the growing demands of economic and political elites. The new Kennedy administration, with its new Secretary of Defense, embraced and more than fulfilled the wishes of these elites.

Finally, the new civilian militarists argued that the United States needed to maintain and enhance its capacity to deter Soviet aggression. That meant developing a technological capacity to be able to respond with devastation to any surprise attack from the Soviet Union. Deterrence theory claimed that each side needed to maintain military might of a magnitude to destroy cities and literally millions of enemy peoples even after the enemy attacks first. Thus, there was a need to continue developing new nuclear weapons, new delivery systems, new ways to bury and protect them from surprise attack, and, in the end, to be able to slaughter millions of people. This was the strategy which became known as Mutually Assured Destruction or MAD.

In the end, Robert McNamara was a product of the stage of U.S. global capitalism — its needs and contradictions — in which he had influence. While it remains important to debate questions of human complicity in policies that lead to death and destruction, it is also vital to reflect on the meaning of those policies, visions, and tactics for today.

First, then as now (in a slightly refined way), policies are justified by claiming that the United States has a particular contribution to make toward the development of other countries. Today the emphasis is placed more on “democracy,” not “development,” but politicians and pundits without a blush still refer to the United States as the “leader of the free world.” The United States is still on a mission, or so its citizens are told.

Second, as in the 1960s, the DOD still has a blank check. Tax dollars still are allocated to new military technologies and programs. Academic researchers, even more now than the days of the 1960s, provide the data and theories that lead to and/or justify foreign and military policy.

And finally, and sad to say, the new administration — while saddled with much greater economic, political, and military problems — projects that same “can-do” spirit that motivated the enormous enthusiasm for the Kennedy programs that led to the Vietnam War and disastrous policies toward Cuba, the Dominican Republic, and the Middle East.

In the end, those interested in peace and justice should use the occasion of the death of Robert McNamara for reflecting on the past to think about the present and the future.