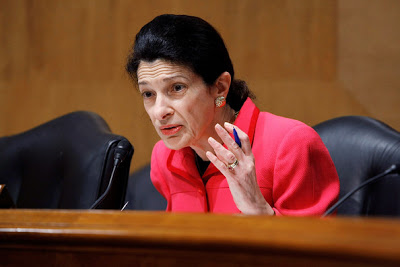 Sen. Olympia Snowe: diluting the “public option.” Photo by Chip Somodevilla / Getty Images.
How Pharma and Insurance intend to kill the public option, and what Obama and the rest of us must do

I’ved poked around Washington today, talking with friends on the Hill who confirm the worst: Big Pharma and Big Insurance are gaining ground in their campaign to kill the public option in the emerging health care bill.

You know why, of course. They don’t want a public option that would compete with private insurers and use its bargaining power to negotiate better rates with drug companies. They argue that would be unfair. Unfair? Unfair to give more people better health care at lower cost? To Pharma and Insurance, “unfair” is anything that undermines their profits.

So they’re pulling out all the stops — pushing Democrats and a handful of so-called “moderate” Republicans who say they’re in favor of a public option to support legislation that would include it in name only. One of their proposals is to break up the public option into small pieces under multiple regional third-party administrators that would have little or no bargaining leverage. A second is to give the public option to the states where Big Pharma and Big Insurance can easily buy off legislators and officials, as they’ve been doing for years. A third is bind the public plan to the same rules private insurers have already wangled, thereby making it impossible for the public plan to put competitive pressure on the insurers.

Max Baucus, Chair of Senate Finance (now exactly why does the Senate Finance Committee have so much say over health care?) hasn’t shown his cards but staffers tell me he’s more than happy to sign on to any one of these. But Baucus is waiting for more support from his colleagues, and none of the three proposals has emerged as the leading candidate for those who want to kill the public option without showing they’re killing it. Meanwhile, Ted Kennedy and his staff are still pushing for a full public option, but with Kennedy ailing, he might not be able to round up the votes. (Kennedy’s health committee released a draft of a bill today, which contains the full public option.)

Enter Olympia Snowe. Her move is important, not because she’s Republican (the Senate needs only 51 votes to pass this) but because she’s well-respected and considered non-partisan, and therefore offers some cover to Democrats who may need it. Last night Snowe hosted a private meeting between members and staffers about a new proposal Pharma and Insurance are floating, and apparently she’s already gained the tentative support of several Democrats (including Ron Wyden and Thomas Carper). Under Snowe’s proposal, the public option would kick in years from now, but it would be triggered only if insurance companies fail to bring down healthcare costs and expand coverage in he meantime.

What’s the catch? First, these conditions are likely to be achieved by other pieces of the emerging legislation; for example, computerized records will bring down costs a tad, and a mandate requiring everyone to have coverage will automatically expand coverage. If it ever comes to it, Pharma and Insurance can argue that their mere participation fulfills their part of the bargain, so no public option will need to be triggered. Second, as Pharma and Insurance well know, “years from now” in legislative terms means never. There will never be a better time than now to enact a public option. If it’s not included, in a few years the public’s attention will be elsewhere.

Much the same dynamic is occurring in the House. Two members who had originally supported single payer told me that Pharma and Insurance have launched the same strategy there, and many House members are looking to see what happens in the Senate. Snowe’s “trigger” is already buzzing among members.

All this will be decided within days or weeks. And once those who want to kill the public option without their fingerprints on the murder weapon begin to agree on a proposal — Snowe’s “trigger” or any other — the public option will be very hard to revive. The White House must now insist on a genuine public option. And you, dear reader, must insist as well.

This is it, folks. The concrete is being mixed and about to be poured. And after it’s poured and hardens, universal health care will be with us for years to come in whatever form it now takes. Let your representative and senators know you want a public option without conditions or triggers — one that gives the public insurer bargaining leverage over drug companies, and pushes insurers to do what they’ve promised to do. Don’t wait until the concrete hardens and we’ve lost this battle.

[Robert Reich was the nation’s 22nd Secretary of Labor and is a professor at the University of California at Berkeley. His latest book is Supercapitalism.]