Ron Ridenour on Obama : Conditional Hope from Across the Seas 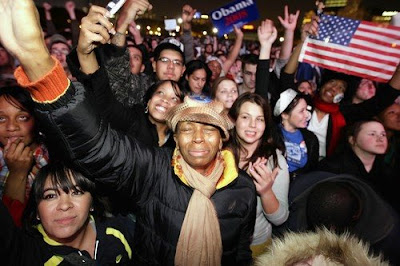 ‘I must confess that I feel a vague hope that he — this black man who was three years old when I fought alongside his people in Mississippi for the right to simply vote — might just remember the 106-year old black woman of whom he spoke in his victory speech.’

DENMARK — Danish television news broadcasted the historic news in the dark of early morning: the first African-American president of the United States of America—military emperor of nearly the entire planet—Barack Obama!

Feelings! What do they feel?

Suppressed joy. Repressed victory. Freedom Songs of struggle and jubilation. Justice won, justice denied. On-going pain of war, mass murder, torture, unnecessary starvation, unnecessary sickness and early death. Disappointment at not being able to cry with unrestrained gladness: at long last, after endless years of excruciatingly painful castrations, lynchings, eye-gougings, rapings,…my people in kinship have achieved a political and a personal victory of such gigantic proportions. The knowledge that the joyful feeling exists for many makes me feel good in it self. The knowledge of why I can’t cry out of pure joy is most disheartening, though. The permanent war age will continue.

“Yet I must confess that I feel a vague hope that he — this black man who was three years old when I fought alongside his people in Mississippi for the right to simply vote — might just remember the 106-year old black woman of whom he spoke in his victory speech, a woman who lives to see one of her own people win the biggest prize. Obama took her with him, and therewith took with him, and for the benefit of his white audience too, the history of slavery, brutal racism and the long hard struggles against it. No other Democratic party candidate could have embraced her and her history in such an intimate way. And certainly the warmongering, racist McCain plus crypto-christian-fascist Palin could not, even in their nightmares, imagine such a warm and enlightened communication.

We can hold Obama to that intimate understanding of the true history of oppressed peoples if we organize and grow in determination, and therewith in strength. Even though Obama will do the bidding of the capitalist-imperialist system, he might just be a significantly bit different and for the benefit of many people whom we abide, like this great great grandmother. And, if that is so, it means we have a greater chance to organize all the more and place on the agenda the absolute need to substitute the current economic foundation with one based upon cooperative production and decision-making, and with cooperative distribution of goods, services, and natural resources, and with an absolute end to all aggressive war-making.

Obama’s inevitable failure to even propose such an agenda let alone fight for it could well drive many people, including sectors of the working class, into an understanding that it is not the person — not the color of the skin, the gender nor the sexual preference — that is the determining factor but the very economic system itself.

Still, I wish to dwell a bit on the victory — the victory of our historical struggles against racism and for racial equality. Let us recall that the United States as a nation was built upon the genocidal racial wars against the aborigine peoples, and upon the slavery of black Africans. Mulato Obama as president of the US of Amerikkka has taken the KKK out of America, at least officially. And that is a victory, and one that can be more readily built upon, which could take the KKK out of America everywhere, if we unite all we can and demand real radical change.

[Ron Ridenour, a regular contributor to The Rag Blog, now lives in Denmark. A noted journalist, author and editor, and an expert on Latin American affairs, Ron cut his teeth with the sixties underground press. He will be sending us dispatches from Cuba in coming weeks.]