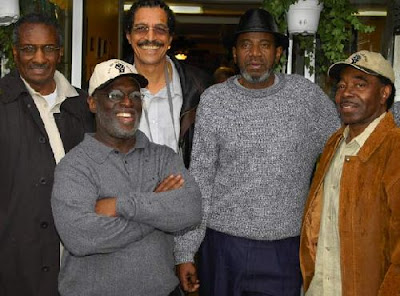 Judge Moscone denied defense motions to dismiss the conspiracy count against the remaining three San Francisco 8 defendants, Herman Bell, Jalil Muntaqim and Francisco Torres. While denying that issues about tolling and the statute of limitations are applicable in this case, he did say that the issue is not completely closed. The purpose of tolling statutes is to discourage defendants from fleeing a state to avoid prosecution by taking advantage of a statute of limitations. None of the three left the state to avoid prosecution. The statute of limitations on conspiracy is 3 years in California and was the basis of dismissing the conspiracy count against the other 5 defendants on February 7. Seven of the men remain charged with a 37 year old murder of a San Francisco police officer – Richard O’Neal was originally only charged with conspiracy and is no longer a defendant in this case. Moscone said that the motion to dismiss can be renewed at the conclusion of the preliminary hearing – scheduled to begin Monday, April 21.

According to Chuck Bourdon, Francisco Torres’ attorney, “the judgment was erroneously made” and that it relied on a case which is inapplicable to the issues presented. “The decision also ignores constitutional issues…and will be appealed to the California State Appellate Court immediately.”

According to today’s SF Chronicle, Gareth Lacey, spokesman for Attorney General Brown who green-lighted this prosecution, said “We have credible and strong new evidence.” Stuart Hanlon, Herman Bell’s attorney, said there is no new evidence in the case and much of the evidence – including the gun purportedly used in the shooting – has vanished. He asked the court, “so if this is true, where is it?” as it hasn’t been turned over to the defense as required by discovery laws.

Judge Moscone did ask prosecutors to give the defense a complete witness list two weeks before the preliminary hearing as well as making it possible for the defense team to have contact with Ruben Scott, who was one of the men captured in New Orleans in 1973, was tortured, and who is believed to be the main cooperating witness for the prosecution.

From Bob Meola / Movement for a Democratic Society