Our Revolutionary History : The Living Theatre 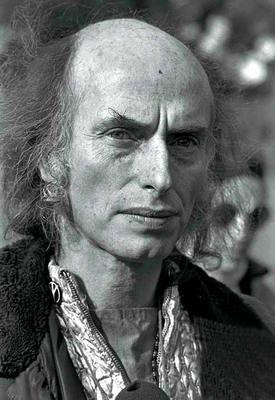 [The Rag Blog begins a regular feature on the people and groups that have contributed to the rich history of our Movement. The Living Theatre lives and co-founder Judith Molina is currently vice chair of the Foundation for a Democratic Society, a support group for MDS and SDS. The text here is from the Living Theatre’s own telling of its history. — Thorne Dreyer / The Rag Blog]
Founded in 1947 as an imaginative alternative to the commercial theater by Judith Malina, the German-born student of Erwin Piscator, and Julian Beck, an abstract expressionist painter of the New York School, The Living Theatre has staged nearly a hundred productions performed in eight languages in 28 countries on five continents – a unique body of work that has influenced theater the world over.
During the 1950’s and early 1960’s in New York, The Living Theatre pioneered the unconventional staging of poetic drama – the plays of American writers like Gertrude Stein, William Carlos Williams, Paul Goodman, Kenneth Rexroth and John Ashbery, as well as European writers rarely produced in America, including Cocteau, Lorca, Brecht and Pirandello. Best remembered among these productions, which marked the start of the Off-Broadway movement, were Doctor Faustus Lights the Lights, Tonight We Improvise, Many Loves, The Connection and The Brig.
The difficulty of operating a unique, experimental enterprise within a cultural establishment ill-equipped to accept it led to the closing by the authorities of all The Living Theatre’s New York venues: the Cherry Lane Theater (closed by the Fire Department in 1953), The Living Theatre Studio on Broadway at 100th Street (closed by the Buildings Department in 1956), The Living Theatre on 14th Street (closed by the I.R.S. in 1963) and The Living Theatre on Third Street (closed by the Buildings Department in 1993).
In the mid-1960’s, the company began a new life as a nomadic touring ensemble. In Europe, they evolved into a collective, living and working together toward the creation of a new form of nonfictional acting based on the actor’s political and physical commitment to using the theater as a medium for furthering social change. The landmark achievements of this period include Mysteries and Smaller Pieces, Antigone, Frankenstein and Paradise Now.
In the 1970’s, The Living Theatre began to create The Legacy of Cain, a cycle of plays for non-traditional venues. From the prisons of Brazil to the gates of the Pittsburgh steel mills, and from the slums of Palermo to the schools of New York City, the company offered these plays, which include Six Public Acts, The Money Tower, Seven Meditations on Political Sado-Masochism, Turning the Earth and the Strike Support Oratorium free of charge to the broadest of all possible audiences.
The 1980’s saw the group return to the theater, where they developed new participatory techniques that enable the audience to first rehearse with the company and then join them on stage as fellow performers. These plays include Prometheus at the Winter Palace, The Yellow Methuselah and The Archaeology of Sleep.
Following the death of Julian Beck in 1985, cofounder Judith Malina and the company’s new director, veteran Hanon Reznikov, who first encountered The Living Theatre while a student at Yale in 1968, opened a new performing space in Manhattan’s Lower East Side, producing a steady stream of innovative works including The Tablets, I and I, The Body of God, Humanity, Rules of Civility, Waste, Echoes of Justice, and The Zero Method. After the closing of the Third Street space in 1993, the company went on to create Anarchia, Utopia and Capital Changes in other New York City venues.
In 1999, with funds from the European Union, they renovated a 1650 Palazzo Spinola in Rocchetta Ligure, Italy and reopened it as the Centro Living Europa, a residence and working space for the company’s European programs. There they created Resistenza, a dramatization of the local inhabitants’ historical resistance to the German occupation of 1943-45. In recent years, the company has also been performing Resist Now!, a play for anti-globalization demonstrations both in Europe and the U.S. A month-long collaboration with local theater artists in Lebanon in 2001 resulted in the creation of a site-specific play about the abuse of political detainees in the notorious former prison at Khiam.
The Living has opened a new theatre at 21 Clinton Street, presenting The Brig. They continue also to present NO SIR!, a play for the street against military recruitment.
The Clinton Street theater is the company’s first permanent home since the closing of The Living Theatre on Third Street at Avenue C in 1993. The decision to return to the Lower East Side (at 19-21 Clinton Street, between Houston and Stanton Streets) reflects the company’s continuing faith in the neighborhood as a vibrant center where the needs of some of the city’s poorer people confront the ideas of the experimenters in art and politics who have settled in the area.
The presence of newly arrived upscale shops and venues only underlines the political contradictions which bristle through the crowded, narrow streets.

Coming soon: Jim Retherford on the Theater of Revolution.