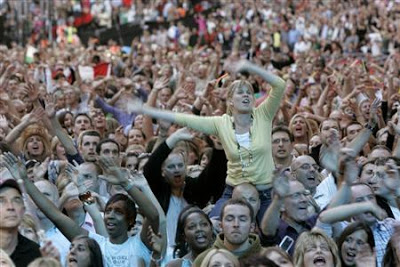 The Millennial Generation: the future face of progressivism?
Progressives have a chance to dominate American politics for the next 40 years

The tides of history and demographics, and the way the world works are on our side.

[The following is a transcript of Campaign for America’s future fellow Sara Robinson’s speech to the, America’s Future Now! conference panel“Kick Them When They Are Down? How the Right Plans to Come Back and What Can Be Done About It.” It has been edited for clarity.]

I’m going to offer a couple of reasons why the long-term prospects for the progressive movement are actually pretty good. I think in the long term, the spirit of the country is with us, and there’s a couple of reasons for that. Then I want to get into three core strategies that I think we need to focus on to make the most of the opportunity.

So, I want to say flat out that I think that the progressive movement has real potential to be a lot longer and a lot stronger than most people think. And I’ll flat out say — if we play our cards right, we progressives have the potential to dominate American politics for the next 40 years. We have a huge opening here.

There are a couple of reasons for this. The first one is the millennial generation, the kids born between 1980 and 2000. They are anywhere between 10 and their mid-20s right now, and they put in their first historic appearance in the 2008 election. They were the ones who really got Obama fever and put him over the top. They are far and away the most multiracial generation in American history — about a third of them identify as mixed race.

Unlike their elders, they were raised from babyhood into consummate team players and self-organizers. They believe in the power of the collective. It’s in their bones. They understand the power of collective action. They organize into teams. They have raised the use of technology in self-organization to a generational art form. They believe in community. They are progressive, in their bones, to their core. Kudos to their boomer and Gen Xer parents who raised them that way.

They’re also natural born systems thinkers. They know that the problems that we’re facing aren’t isolated pieces and parts that can be solved by this committee and that agency. They understand that its all one thing and that if you’re going to solve it all, you’ve got to tackle it all. And there are strategies that they use to do that, and they’ve been taught these strategies by their entertainment and their families from babyhood.

This unique generation caught Obama fever at the critical age, when people’s lifetime political attitudes are shaped. They are progressives now, and if we don’t let them down, most of them will be for life. And both their sheer numbers and their solid organizing skills make them a very solid bedrock on which we can easily build a progressive structure that could stand until 2050.

Along these same lines, let’s not discount the power of collective memory. In the post-war era, conservatism had a hard time making a comeback as long as most of the country’s voter base had its memories of 1929 and World War II. Religious and free-market fundamentalism had a hard time getting any traction in the post-war decades because our grandparents knew first hand where that road led, and they weren’t having any of it.

It was only in the 1970s when those old survivors were finally outnumbered by younger voters that anyone could take their ideas seriously again. Likewise, today’s conservatives are going to have a really hard time of it as long as there’s anybody around who remembers the crash of 2008, and that’s going to be a good long while.

The other reason the coming years belong to progressives is that there are deep structural shifts afoot that no conservative media dissembling, no amount of bank bailout money and no amount of willful denial can continue to paper over.

The corporatist order has failed us utterly and completely. Most of us here know this — we’ve done the math. We know that an economy built on dwindling oil supplies, vast global inequities, and exploiting the resources of a finite earth is simply not sustainable. The current is recession is happening in no small part because we are finally bumping up against these facts. K Street and Wall Street both think they can rearrange the deck chairs and get things back to normal — defined as five years ago. But here on the progressive side of Main Street, we know that normal as we’ve known it in the post-war era is over. And rearranging deck chairs isn’t going to help when the whole boat is sinking.

The country has faced crisis points like this one before. And when it does, it always turns to its progressive side. Conservatives are just constitutionally incapable of providing the answers, vision or the incentive to lead America to a new kind of future. And the sooner and more decisively we progressives step forward and show America where we want to take it, the more confidence they’ll have in our ability to lead them there.

This is the best moment we’ve had in 80 years. The country is hungry for big changes. It’s time for us to step forward boldly, give them a new vision to grab onto, and show them just how much better things can be.

But we also need to make sure that the cons stay bottled up. The first part of that is to write a full and accurate history of the Bush years — the kind of history that makes inquiries, takes account, names names and kicks butts.

The first step in any change process is understanding that you have a problem. I think most of us get that by now. The next step is understanding exactly what the problem is. It’s only after that that you can start looking at solutions and next steps. It’s understandable that the new president doesn’t want to waste his precious time and political capital. But on this he’s putting his needs ahead of the needs of the entire progressive movement and our future.

These stories need to be told now, while they’re fresh. Former Vice President Dick Cheney is already out there trying to rewrite history. The conservatives are unbelievably good at this, and they’ll succeed if we don’t get out there and stop them. We need to claim the next narrative for our own about what happened.

The second objective is restoring America’s trust in the basic competence of its government. FDR faced this same problem, and he solved it by instituting Social Security, which saved an earlier generation, whose retirement had also been wiped out in a Wall Street feeding frenzy. I can understand that particular gift a whole lot better now.

But Social Security did more than that. It also shut up the economic royalists, and it reintroduced Americans to the value of social contracts and the belief in the common good. And it worked.

America had accepted these ideas so completely that liberals were able to seize control of the entire political discourse, and they dominated it for the next few decades. On most issues, the conservatives were there, but they had no choice but to accommodate themselves to what the progressives wanted.

In our generation, this teachable moment will be passing universal health care with a public option. The right wing is absolutely terrified about this because it knows that once Americans realize how much government can deliver, their whole political narrative will be exposed as a colossal lie.

Fifteen years ago, in the heat of the 1993 Hillary-Care debate, conservative political analyst and commentator Bill Kristol wrote a famous strategy memo in which he argued that “the passage of the Clinton health care plan in any form would be disastrous. It’s success would signal the rebirth of centralized welfare state policy at the very moment such policy is being perceived as a failure in other areas.”

Conservatives are acutely aware that if we get health care that works, they’re going to be shut out of power and out of the conversation for decades to come.

They’ve worked very hard to break the trust between Americans and the government. Once people realize that government can solve this problem, that trust is going to return. And Americans will start to think about what else we might be able to accomplish if we pull together. From that point on, the dominant narrative will be ours.

The third objective won’t be news to most of you — like I said, it’s all one thing. The problem at the root of every other problem we face is campaign-finance reform. There are piles of studies now proving that upwards of 70 percent of Americans generally support progressive values. But no matter what your issue or concern is — education, the environment, social justice, economic reform, anything — the fact is that as long as money does the talking, those voices aren’t going to be heard.

As progressives, we tend to think about this issue as an afterthought just because it’s so big and exhausting — something that might be nice if we can get to it one day. But it’s not. It’s the very first thing — the one cause that makes every other effect possible.

The Democrats don’t want to put this on the national agenda. But for us as progressives, public financing options are a non-negotiable prerequisite. If we don’t do this, we’re not going to be able to govern the way we want to, and we’re probably going to run out of power a lot sooner than we should.

There is, of course, a lot more to be said about these ideas. … But I encourage you, in closing, to take heart. The tides of history, demographics, and just the way the world works are on our side. So is the national mood.

If we can write an accurate history of the Bush years, restore the trust between Americans and their government, and get back to a place where votes speak louder than money, there’s no reason we can’t keep the conservatives in limbo until we’ve all exited stage left, and it will be our grandkids’ turn to deal with them.

Sara Robinson is a fellow at the Campaign for America’s Future, and a consulting partner with the Cognitive Policy Works in Seattle. One of the few trained social futurists in North America, she has blogged on authoritarian and extremist movements at Orcinus since 2006, and is a founding member of Group News Blog.

This entry was posted in RagBlog and tagged American Society, Progressive Movement. Bookmark the permalink.