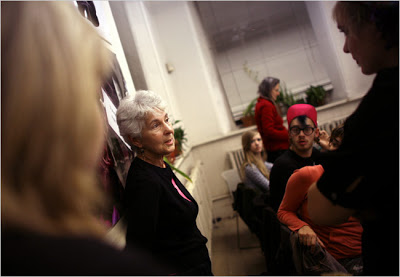 Barbara Harris discussing ways to educate parents about their right to keep information on their children from the military. Photo: Yana Paskova for The New York Times.
‘Counter-Recruiter’ Seeks to Block Students’ Data From the Military
By Javier C. Hernandez / October 22, 2008

Barbara G. Harris, 72, looked her troops in the eye. Staring out at mohawks on one side of the room, salt-white bobs on the other, she said in her delicately firm way: “Hold your ground. You have every right to stand there, and if anyone tells you differently, tell them your rights.”

Barbara Harris discussing ways to educate parents about their right to keep information on their children from the military.

She had assembled the group in her war room, a space near Union Square lent by a sympathetic organization, where plants and antiwar signs line the walls, in preparation for a blitz Thursday evening at parent-teacher conferences, where Ms. Harris and the others plan to stand on sidewalks outside school buildings armed with opt-out forms and their best sales pitches.

“You don’t have a whole lot of time — that’s the point,” Ms. Harris told the volunteers, who ranged in age from college students to the Granny Peace Brigade, a New York group of older women started in 2005 to protest the Iraq war. “Don’t be frustrated by that. They do stop.”

Ms. Harris’s efforts this week come as the Department of Education is facing renewed criticism from the New York Civil Liberties Union on the issue of military recruitment, after changing its policy in September to allow recruiters to get data about high school students from a central office. In the past, recruiters had to go from school to school to get names, addresses and phone numbers for students.

Federal law requires that schools provide the military the same access as colleges and other prospective employers. Parents are allowed to block access to a child’s information by signing an opt-out form.

Douglas Smith, a spokesman for the United States Army recruiting command, said that he was unaware of Ms. Harris but that the military did not object to counter-recruitment efforts. “We would hope that we would have an open discourse and not have one group try to stifle the ability of the other group to speak,” he said.

Ms. Harris, who lives in Midtown, started counter-recruiting three years ago, troubled by what she saw as an increasingly aggressive attempt to recruit low-income and minority students into the armed forces (she calls it a “poverty draft”). She has made it her mission to inform students, parents and teachers of alternatives to joining the military. She was among 18 members of the Granny Peace Brigade arrested and charged with disorderly conduct at the Times Square recruitment center in 2005; they were later acquitted of all charges.

Her latest campaign caps a half-century of protests. In the 1950s, while her friends ducked under desks and talked of fallout shelters, Ms. Harris took to the streets, rallying against the proliferation of nuclear weapons.

As the Vietnam War roiled, she focused on peace and women’s rights. She got a job teaching special-needs children at a public school in Pleasantville, N.Y., followed by a 21-year stint as a corporate trainer at AT&T. In the 1990s, Ms. Harris returned to the classroom, teaching English as a second language at the New School until her retirement in 2002. She has two children and two grandchildren.

Friends describe her as a protester who rarely raises her voice and makes it a point not to talk over others.

“She is an absolute wonder,” said Nancy Kricorian, coordinator for the city’s chapter of Code Pink, a women’s antiwar group Ms. Harris belongs to. “She can talk to the most rabid person, somebody who totally disagrees with what we’re doing, in an even and convincing way.”

Bev Rice, a member of the Granny Peace Brigade who planned to help with Thursday’s counter-recruitment effort, said: “Nothing appears to upset her. She’s just the type of person you want to do something for.”

Ms. Harris, who canvasses on parent-teacher nights in fall and spring, and talks with community groups about high school recruiting in between, estimated that 9 out of 10 parents she speaks with do not know about the opt-out form, despite the city’s requirement that principals distribute information about it.

“You give them the information, you see them change their minds,” she said. “They know their kids are vulnerable. They say: ‘They’re calling my baby and I don’t want them to speak to my child. What should I do?’ ”

Over the years, Ms. Harris watched as military recruiters became, in her eyes, unduly forceful in the hallways of New York high schools. Recruiters formed friendships with students, she said, and gave them the impression that being a soldier can cure all their struggles.

Ms. Harris said she does not mind if students join the military, as long as they are informed of the risks and other opportunities, and meet with recruiters off school grounds. But she said that as she spoke with students in poor neighborhoods like East Harlem, she discovered that many of them were unaware that they could get financial aid for college on their own and saw the military as their only option.

“For many of these young kids, especially boys, it’s a macho thing — you’re strong, you’re one of the team, you get this respect if you join,” she said. “If a young person wants to enlist, at least he or she knows what it’s about, what the truth about recruiting is. They can decide if that’s the best choice for them.”

This entry was posted in RagBlog and tagged Military Recruiting, Peace Activists. Bookmark the permalink.