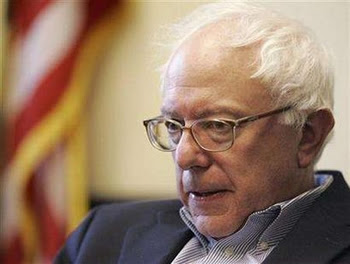 Socialist Senator-elect Bernie Sanders (I-VT): Way ahead of the curve on this one. Photo by Brian Snyder / Reuters.
Obama backs limit to executive compensation similar to Sanders’ Stop the Greed on Wall Street Act

‘We are on the verge of a depression that these people helped cause, so that helps wake people up,’ Sanders said, explaining the increased support for his proposal. ‘It should have been done years ago, of course.’

Chalk one up for the socialist.

The measure was promptly ignored and died a quick death in committee.

But when President Barack Obama proposed a similar limit last week — his would cap pay at $500,000; Sanders would have put the lid on at $400,000 — the accolades came pouring in. Even the free market devotees at the conservative Cato Institute issued a press release applauding the idea, telling executives: “Sorry, guys, you asked for it.”

“We are on the verge of a depression that these people helped cause, so that helps wake people up,” Sanders said, explaining the increased support for his proposal. “It should have been done years ago, of course.”

Sanders is often dismissed as a novelty in two-party Washington. But the move toward heightened corporate regulation moves him a step closer to the political mainstream.

The Vermont independent spent 16 years in the House and has spent another two in the Senate railing against corporate greed and the rising income gap. “I occasionally quote some of the things I did 10 years ago,” he said.

While the current economic troubles limit Sanders’ sense of vindication, he’s quick to point out his earlier opposition to the deregulation that many believe allowed a mild downturn to sink into a severe recession.

“This is an issue that some of us have been onto for a number of years,” he said. “You didn’t have to be a Ph.D. in economics to figure this out.”

“Greenspan had more influence than I did,” said Sanders.

“This should be seen as the beginning,” he said. “Wall Street has got to know that many of us believe a new day has got to come.”