SOFA* Finally Gets Through Iraqi Parliament 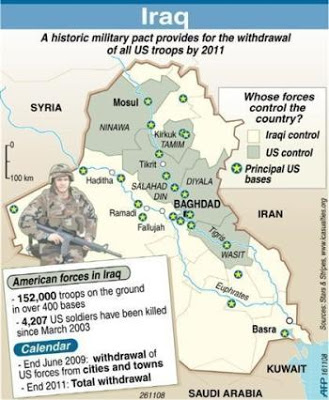 BAGHDAD – Iraq’s parliament on Thursday approved a landmark military pact that will see all US troops withdraw by the end of 2011, eight years after the invasion that toppled Saddam Hussein and plunged the country into chaos.

After 11 months of hard-nosed negotiations with Washington and a flurry of domestic political horse-trading leading up to the vote, the pact was approved by 149 members of the 198 who attended the session of the 275-member assembly.

The final count of the votes was provided by the office of Deputy Parliamentary Speaker Khaled al-Attiya, which corrected an earlier count announced during the parliamentary session itself.

“It is good to see that representatives have reached a national consensus.”

The agreement was approved by the cabinet a week ago and is now virtually guaranteed to be ratified by Iraq’s presidential council.

The United States hailed the passing of the agreement, saying it would “formalise a strong and equal partnership” in a statement from Ambassador Ryan Crocker and General Ray Odierno, the top commander of US troops in Iraq.

“(The agreement) provides the means to secure the significant security gains we have achieved together and to deter future aggression,” they said. “We congratulate the government of Iraq and its elected representatives.”

The measure would govern some 150,000 US troops stationed in over 400 bases when their UN mandate expires at the end of the year, giving the Iraqi government veto power over virtually all of their operations.

It marks a coming-of-age for Maliki’s government, which drove a hard bargain with Washington, securing a number of concessions over nearly a year of tough negotiations.

The accord has still drawn fire from certain quarters, including followers of the hardline Shiite cleric Moqtada al-Sadr, who reject any agreement with the United States and who protested at the accord in Baghdad last Friday.

As the voting on the pact began several Sadrist MPs pounded tables in a bid to hinder the vote, chanting “Yes, yes to Iraq… No, no, to the occupation,” but the 30-member bloc failed to defeat the agreement.

The vote came after a flurry of last-minute negotiations in which the main Sunni parties secured a package of political reforms from the government and a commitment to hold a referendum on the pact in the middle of next year.

Should the Iraqi government decide to cancel the pact after the referendum it would have to give Washington one year’s notice, meaning that troops would be allowed to remain in the country only until the middle of 2010.

The pact was made possible in part by dramatic improvements in security over the past year, with US and Iraqi forces largely containing the violence and the chaos that erupted in the wake of the 2003 US-led invasion and Saddam’s ouster.

But moments before the vote two people were killed and more than two dozen wounded in separate suicide bombings in northern Iraq targeting local security forces, underscoring the lingering violence in the country.

In the first attack south of the city of Mosul, a suicide car bomb rammed into a police patrol, killing two civilians and wounding 25 others, including 15 policemen, police said.

In the second, a bomber strapped with explosives wounded four people when the attacker targeted a police patrol in the centre of Mosul — which the US military considers the last urban bastion of Al-Qaeda in Iraq.

Iraq won a number of concessions in the agreement, including a hard timeline for withdrawal, the right to search US military cargo and the right to try US soldiers for crimes committed while they are off their bases and off-duty.

The agreement also requires that US troops obtain Iraqi permission for all military operations, and that they hand over the files of all detainees in US custody to the Iraqi authorities, who will decide their fate.

The pact also forbids US troops from using Iraq as a launch-pad or transit point for attacking another country, which may reassure Syria and Iran, according to the official Arabic version of the pact, translated by AFP.