SPORT / No One is Illegal : Boycott the Diamondbacks 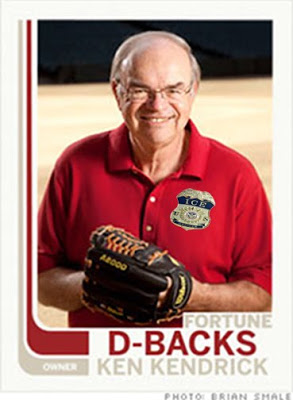 — Public Enemy, By the Time I Get to Arizona

This will be the last column I write about the Arizona Diamondbacks in the foreseeable future. For me, they do not exist. They will continue to not exist in my mind as long as the horribly named “Support Our Law Enforcement and Safe Neighborhoods Act” remains law in Arizona. This law has brought echoes of apartheid to the state.

One Democratic lawmaker has said that it has made Arizona a “laughingstock” but it’s difficult to find an ounce of humor in this kind of venal legislation. The law makes it a crime to walk the streets without clutching your passport, green card, visa, or state I.D.

It not only empowers but absolutely requires cops to demand paperwork if they so much as suspect a person of being undocumented. A citizen can, in fact, sue any police officer they see not harassing suspected immigrants. The bill would also make it a class one misdemeanor for anyone to “pick up passengers for work” if their vehicle blocks traffic. And it makes a second violation of any aspect of the law a felony.

In response, Representative Raul Grijalva, who’s from Arizona itself, has called for a national boycott against the state, saying, “Do not vacation and or retire there.” He got so many hateful threats this week that he had to close his Arizona offices at noon on Friday.

Many of us aren’t in either the imminent vacation or retirement mode. We do, however, live in baseball cities where the Arizona Diamondbacks come to play.

When they arrive in my hometown in D.C., my back will be turned, and my television will be off. This is not merely because they happen to be the team from Arizona. The D-backs organization is a primary funder of the state Republican Party, which has been driving the measure through the legislature.

The team’s big boss, Ken Kendrick, and his family members, E. G. Kendrick Sr. and Randy Kendrick, made contributions to the Republicans totaling a staggering $1,023,527. The Kendricks follow in the footsteps of team founder and former owner Jerry Colangelo. Colangelo, along with other baseball executives and ex-players, launched a group called Battin’ 1000: a national campaign that uses baseball memorabilia to raise funds for a Campus for Life, the largest anti-choice student network in the country.

Colangelo was also deputy chair of Bush/Cheney 2004 in Arizona, and his deep pockets created what was called the Presidential Prayer Team — a private evangelical group that claims to have signed up more than 1 million people to drop to their knees and pray daily for Bush.

Under Colangelo, John McCain also owned a piece of the team. The former maverick said before the bill’s passage that he “understood” why it was being passed because “the drivers of cars with illegals in it [that] are intentionally causing accidents on the freeway.”

This is who the Arizona Diamondback executives are. This is the tradition they stand in.

The Diamondbacks’ owners have every right to their politics, and if we policed the political proclivities of every owner’s box there might not be anyone left to root for (except for the Green Bay Packers, who don’t have an owner’s box). But this is different. The law is an open invitation to racial profiling and harassment. The boycott call is coming from inside the state.

If the owners of the Diamondbacks want to underwrite an ugly edge of bigotry, we should raise our collective sporting fists against them. A boycott is also an expression of solidarity with Diamondback players such as Juan Guitterez, Gerardo Parra, and Rodrigo Lopez. They shouldn’t be put in a position where they’re cheered on the playing field and then asked for their papers when the uniform comes off. 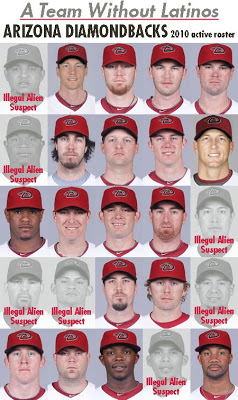 4 Responses to SPORT / No One is Illegal : Boycott the Diamondbacks