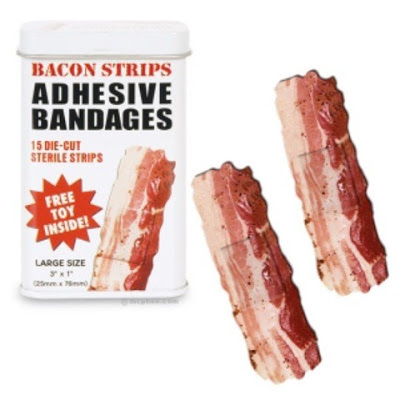 Health care system black and blue?
Cover it up with a Bacon Strip!

It was a good, simple idea Earle Dickson had back in 1920 — to attach a dressing to a cloth that didn’t have to be wrapped and tied — usually one-handed, or with the help of teeth. Add sterility to the cotton, and you have a perfect little gizmo — protecting a small wound from dirt and germs, reducing the likelihood of its reopening, and maintaining a moist environment for the migration of new skin cells.

The evolution of the band-aid gives us a metaphorical glimpse into the dynamics of the American cultural/political system.

At the beginning of the ebullient Fifties, along with chrome, fins, and anti-Communism, came the first decorative band-aids. Stars and Strips® on plastic. Conspicuous consumption. Be proud you were wounded. Then the corporations — all with their ®s attached — moved in with Super-, Spider-, and Bat-man, then Barbie and Ken, and now Rug-Rats, Smiley Faces, and Sponge Bob. Band-aids were no longer wound care, but fashion accessories for toddlers.

Enter the current deadly combination of irony and infantilization, and the grown-ups followed hard upon with unicorn, Jesus, and bacon strip band-aids at four to five times the generic price.

That was one very American direction — as Max Bialystock says in The Producers, “If you’ve got it, flaunt it!”

Parallel evolution: for the more decorous among us, or young urban professionals not wanting proletarian-looking hands, the Sixties saw the spreading use of disguise: transparent band-aids, to which was added the patina of political correctness, since “flesh colored” might be any color flesh (if you ignore the white, colorblind rectangle under it).

Now we have special shapes for knuckle and fingertip, though only God, and perhaps Johnson&Johnson knows which is to be used where. We have giant band-aids for knee scrapes, and the stirring of high-tech medicalization with the introduction of home-use gel-impregnated burn dressings.

Let’s apply these categories to the recent difficult birth and passage of the health reform bill, an Obama accomplishment commonly seen as a band-aid.

So we have this wound in America called disastrous health care — at least for the vast majority. The simple, practical, white-adhesive tape band-aid would have been to adopt any variation on the national health care systems used worldwide by advanced industrial countries not afflicted with exceptionalism. That would still be a band-aid because it would largely address disease post-facto, and not the physical and mental pollution and economic causes behind it. Nevertheless, it would have been straight-forward, still practical.

At the same time — disguise, and the opacity of CNN transparency. (The opacity is the white rectangle covering the wound.) Let the many colors of wounded flesh show through. Discarded children and cancer victims, the poor, the old, most of the currently uninsured. Under the white rectangle, Big Pharma and the insurance companies.

In Germany, Band-Aids® are called “plasters” — and they are white. “Germans also have universal, national health care.”