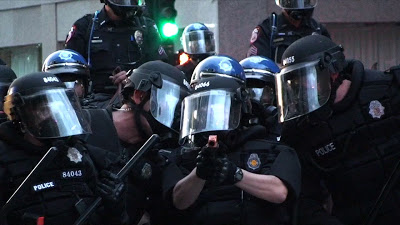 When a Jefferson County deputy deployed pepper spray into a crowd during the first night of the Democratic National Convention, he did not know that his targets were undercover Denver police officers.

During a melee that occurred Aug. 25 between protesters, police and bystanders near Civic Center Park, undercover Denver detectives staged a struggle with a police commander in order to get out of the crowd undetected.

A Jefferson County deputy, unaware of the presence of undercover police, thought that the commander was being attacked and deployed the pepper spray, according to a police use-of-force report obtained by the American Civil Liberties Union of Colorado.

The report does not say whether the pepper spray used on the undercover police officers was the first deployment or whether the melee already was underway.

About 106 people were arrested during the incident that took place at 15th Street and Court Place.

Denver police have testified during court trials that they deployed officers to the area that night because they had gathered intelligence that anarchists had planned to gather in Civic Center Park, then move toward the 16th Street Mall to wreak havoc at delegate hotels and other businesses during the DNC.

On Thursday, the ACLU of Colorado sent a letter to Denver’s Independent Monitor, Richard Rosenthal, asking for the Internal Affairs Bureau to conduct an investigation of the pepper-spraying incident.

“The actions of the undercover detectives on Aug. 25, 2008, may have had the effect of exacerbating an already ‘tense situation,’ as their feigned struggle led nearby officers and the public to believe that a commanding officer was being attacked by protesters and that the situation necessitated the use of chemical agents,” says the letter, written by ACLU staff attorney Taylor Pendergrass.

“Such actions may have escalated the overall situation by causing officers on the scene to fear that the protesters threatened their safety, when in fact, the struggle was only between uniformed officers and undercover officers,” he wrote.

Rosenthal said he had received the ACLU’s letter about the pepper-spray incident.

The monitor also received a letter from the ACLU last week requesting a probe into possible conflicting or false statements by police and whether the department withheld evidence in some of the protesters’ criminal trials.

“The letters have been received, and I am in the process of reviewing and evaluating them,” Rosenthal said Thursday.

The ACLU claims videos show that protesters, as well as otherwise uninvolved onlookers, were never ordered or given a chance to disperse before they were surrounded and detained by police.

The city has said it would prosecute as many as 60 accused protesters who declined to accept plea deals. Some cases already have been dismissed after a judge cited a lack of evidence.

DNC standoff between cops and protestors in Denver, August, 2008

Protesters get hit with pepper spray at DNC protest.

Read the ACLU’s letter to the Office of the Independent Monitor.