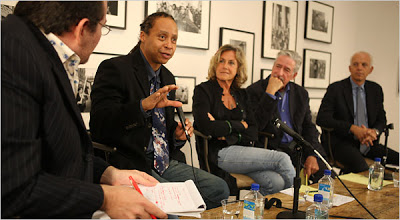 Nothing is more non-nonconformist than a nearly two-hour panel discussion. But times have indeed changed, and the three former political radicals who gathered for one on Saturday in Manhattan did not seem to mind.

At a table in the Steven Kasher Gallery in Chelsea, Tom Hayden sat next to Bernardine Dohrn. Next to her was Jamal Joseph.

Forty years ago, Mr. Hayden was a co-founder of Students for a Democratic Society, a driving force behind the movement against the Vietnam War. He was also a member of the Chicago Seven, who were tried on charges of conspiring to incite a riot at the Democratic National Convention in 1968. Ms. Dohrn was also a leader of S.D.S., and would later help form a violent splinter group called the Weather Underground that bombed government buildings in the early 1970s. Mr. Joseph was a young Black Panther in Harlem who went to prison in the ’80s for harboring a fugitive.

Today, Mr. Hayden, Ms. Dohrn and Mr. Joseph are lecturers, writers and activists. On the Saturday after Election Day, they spoke softly into their microphones and incited no riots among the small audience, but their spirits were high. Though President-elect Barack Obama was not a product of the antiwar movement 40 years ago, the panelists described him as a benefactor of its transformations and predicted he would be the inspiration for social movements.

Mr. Hayden, a former California state senator, said that young Obama supporters “will determine the role of social activism for the next 30 years” and will be inspired by Mr. Obama to pursue community organizing work instead of Wall Street jobs. “A community organizer has been elected president of the United States,” Mr. Hayden said.

Mr. Hayden, Ms. Dohrn and Mr. Joseph met at the gallery to discuss the 1960s and the impact of an Obama presidency on the American political left. Of all the radicals, however, the one who played the biggest role in the presidential race, William Ayers, Ms. Dohrn’s husband, was not there.

Mr. Ayers, who also helped found the Weather Underground, is now a professor of education at the University of Illinois at Chicago. Mr. Obama’s association with Mr. Ayers was a favorite target of criticism by Senator John McCain and Gov. Sarah Palin of Alaska.

Early on in the panel discussion, the moderator, Joshua Micah Marshall, editor and publisher of the political blog Talking Points Memo, asked Ms. Dohrn what it was like for her and her husband to play cameo roles in the campaign.

She said they felt “tremendously lucky to have been together for almost 40 years now.” She added that they were still “proud radicals,” and were “definitively not now, or then, terrorists.”

Of Mr. McCain’s attempts to turn Mr. Obama’s association with Mr. Ayers into a political liability, she said: “It didn’t work in this campaign, if work means reaching independent voters, middle America, thinking people.” She added, “We’re fine and really eager to resume our normal lives.”

Ms. Dohrn, a clinical associate professor at Northwestern University Law School, teaches and writes about children’s law and juvenile justice. She and Mr. Ayers were indicted in 1970 for inciting to riot and conspiracy to bomb government buildings, but charges were dropped because of prosecutorial misconduct.

The discussion on Saturday was organized to promote an exhibition of photographs by David Fenton, who chronicled street protests and the lives of counterculture figures in the late 1960s and early ’70s. The exhibition, which runs until Nov. 26 at the Steven Kasher Gallery, features more than 75 photographs of Columbia University protests, Central Park be-ins and Black Panther demonstrations. Mr. Fenton went on to become chief executive of Fenton Communications, which represents the liberal antiwar group MoveOn.org.

Mr. Fenton, who also sat on the panel, said he had not seen Ms. Dohrn since he photographed the Days of Rage protests in Chicago in 1969. Mr. Fenton, 56, had dropped out of the Bronx High School of Science in 1968 to pursue photojournalism. “There were demonstrations every week,” Mr. Fenton said. “I don’t know if that will ever happen again. I hope it doesn’t have to.” 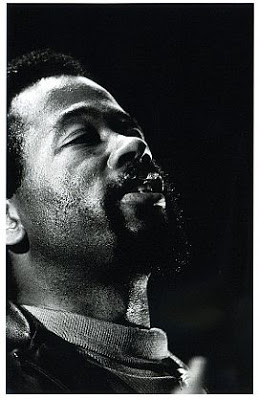 40 Years after 1968 – 69, an Exhibition and Panel Discussion with Tom Hayden, Bernardine Dohrn, and others.

“These pictures are extraordinary. They capture the last couple of years of the 60s more closely than anything I know.” Norman Mailer, 2005

On October 30th the Steven Kasher Gallery in Chelsea opened the exhibition David Fenton: Eye of the Revolution, a look back at Yippies, Black Panthers, Be-Ins, Weatherman, the Chicago 7, tear gas, protests, and the years that changed America forever. The exhibition and panel will address the question of the lasting impact of the 60s on politics and the media.

Still in his teens in the late 60s, underground news photographer David Fenton –- now CEO of a major public interest communications firm –- photographed the passionate street protest and calculated mass media tactics that still shape U.S. politics and culture today. His photos appeared in anti-war and counter-cultural publications around the world, as well as in The New York Times, Life, Look, Newsweek and many others.

Since his employment at Liberation News Service – which paid him $25 a week in 1969 – Fenton’s protest-driven view of the world has evolved into Fenton Communications, the nation’s largest progressive communications firm. With clients including MoveOn.org and Nelson Mandela, he is still pushing for change in the tradition of 40 years ago.

The panel discussion on November 8th, the Saturday after the Election, will examine the negative and positive legacies of the 60s, and the evolution of alternative media then and now.

Go here to see photos from the exhibition.