Steve Max : The Snare and Deception of ‘Family Economics’ 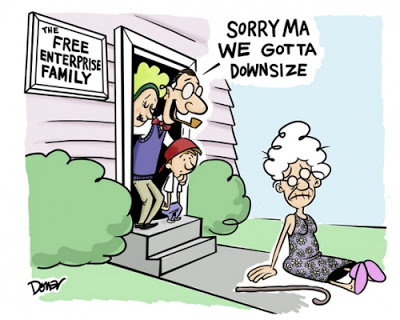 The trap that Obama and many Congressional Democrats constantly fall into is to act and talk as if Republicans are normal and that this is a rational situation.

Would anyone not have thought President Truman insane had he gone before the nation in 1945 and said, “I have had experience running a small business, and based on what I learned selling neckties I have decided to drop the atomic bomb on Japan.”(1)

Yet, when House Majority Leader John Boehner proposes to drop the bomb on the American economy based on his experience selling plastics with the Nucite Sales corporation of Cincinnati, no one thinks it at all odd, least of all President Obama.

In last night’s response to Obama’s televised address to the nation, Boehner referred at least twice to his own small business experience as the source of his knowledge that government, like small business, must live within its means.

The trap that Obama and many Congressional Democrats constantly fall into is to act and talk as if Republicans are normal and that this is a rational situation. Obama consistently tells the public what a fine fellow Boehner is, how they share the same goals of deficit reduction, how they agree that the nation must live within its means, and how the only differences are over the way to achieve their common goals. The sad thing is that for Obama this likely goes beyond being nice, he probably believes it.

Democrats need to start speaking the truth. The economy of nation states is nothing like a small business (or any size business) and the federal budget is not remotely like your family budget, another oft-spoken Republican falsehood. People who ignorantly think such things, the President should say, are not fit to be the nation’s decision-makers because it is too dangerous.

In addition, it is an outright lie that cutting government spending will create jobs. It is a lie that taxing the rich is bad for business. It is a lie that raising the debt ceiling discourages investment. Republicans never believed any of this when they were in power. They are lying now and they know it.

The idea that the federal budget is not like your family budget is particularly difficult to grasp because it is counterintuitive. Back when cars were first invented, many people turned their stables into garages. This contributed to the popular notion that if your car wasn’t working properly, a few days of rest in the garage would help it. People couldn’t quite grasp that while the car and the horse served similar functions and might even occupy the same building, they operated on totally different principles.

The federal government is not a family or a business, it is the administrative committee of the entire nation. While it must indeed live within its means, as the Republicans say and the President concurs, the potential means is the entire social surplus. That is the value of everything produced in America minus the portion that people live on, the portion spent on business expenses, the portion needed to maintain the infrastructure, and the portion needed for future investment.

What is left over is the social surplus. How the social surplus is divided between private profits, public services, and governmental administrative costs is entirely a political matter. Actually, the amount of the social surplus isn’t calculated by anyone, perhaps because that would raise too many questions about who owns it, but it exists, it is huge and it is the means within which we must live. And, as noted, whether it goes to Medicare or to the richest 400 families is a political problem, not an economic one.

When Boehner and the Republicans insist that government must live within its means like any family or business, what they are really saying is not that we have reached the objective limit of the social surplus (2), but rather that they will decide what the means are, and the rest of us will live within them.

Measures such as the money supply, the federal budget, and the debt ceiling are arbitrary political constructs that are not based on actual economic limits. In 2010 when the Federal Reserve thought it necessary to stimulate the economy, it basically printed $600 billion. The money wasn’t in the budget and it wasn’t borrowed, it was just created, showing how flexible the situation really is. (3)

The federal budget is a good example of this. There is certainly a deficit, but the amount is a function of how the bookkeeping is done. Surely, having run a small business, Rep. Boehner knows that businesses and almost all state governments have capital budgets for buying structures and equipment. When a business buys a computer, a machine or a warehouse, it is not considered to have lost money. Rather it has exchanged one asset (cash) for another of equal value (a truck.) After the transaction, its net worth on the books is the same as before.

Not so with the federal budget, which treats buying a computer as if it were the same as giving a corn subsidy to agribusiness. Never mind that the corn subsidy is just money gone, but the government now owns the computer which should be considered an asset. If federal bookkeeping methods were the same as in Boehner’s business, the deficit would be far, far less.

The point is that many of the financial measures that we tend to consider as reflections of objective laws of nature (you must live within your means) are really our own inventions as a society, and we have great, though not unlimited, latitude in which to change them. What they are actually reflections of is the balance of class forces within the political structure and they are designed to set the framework in which the owners of wealth can become even richer.

The fact is that, if the Republican goals in the debt ceiling debate were actually based on true economic principles and that debt really causes unemployment, then we would all be on their side and telling them not to compromise with Obama. Instead of saying that he shares their goals, the President needs to explain how they are simply wrong. Otherwise he will continue to muddle in the consensus trap.

(1) The actual reasons were equally as dubious, but that is another story for another time. Meanwhile see The Decision to Use the Atomic Bomb by Gar Alperovitz. http://www.amazon.com/Decision-Use-Atomic-Bomb/dp/067976285X
(2) For example, that we are eating more radishes than can be grown.
(3) http://www.bloomberg.com/news/2010-11-03/federal-reserve-to-buy-additional-600-billion-of-securities-to-aid-growth.html

[Steve Max, who was a major figure in early SDS, is a member of the Democratic Socialists of America and Three Parks Independent Democrats. He works as an organizing trainer at the Midwest Academy in Chicago. This article was published and distributed by Progressive America Rising.]

1 Response to Steve Max : The Snare and Deception of ‘Family Economics’