It comes down to what Colin Powell used to call ‘the Pottery Barn theory.’ We will own what we break and we don’t want to own the Sunni and Shi’a argument. 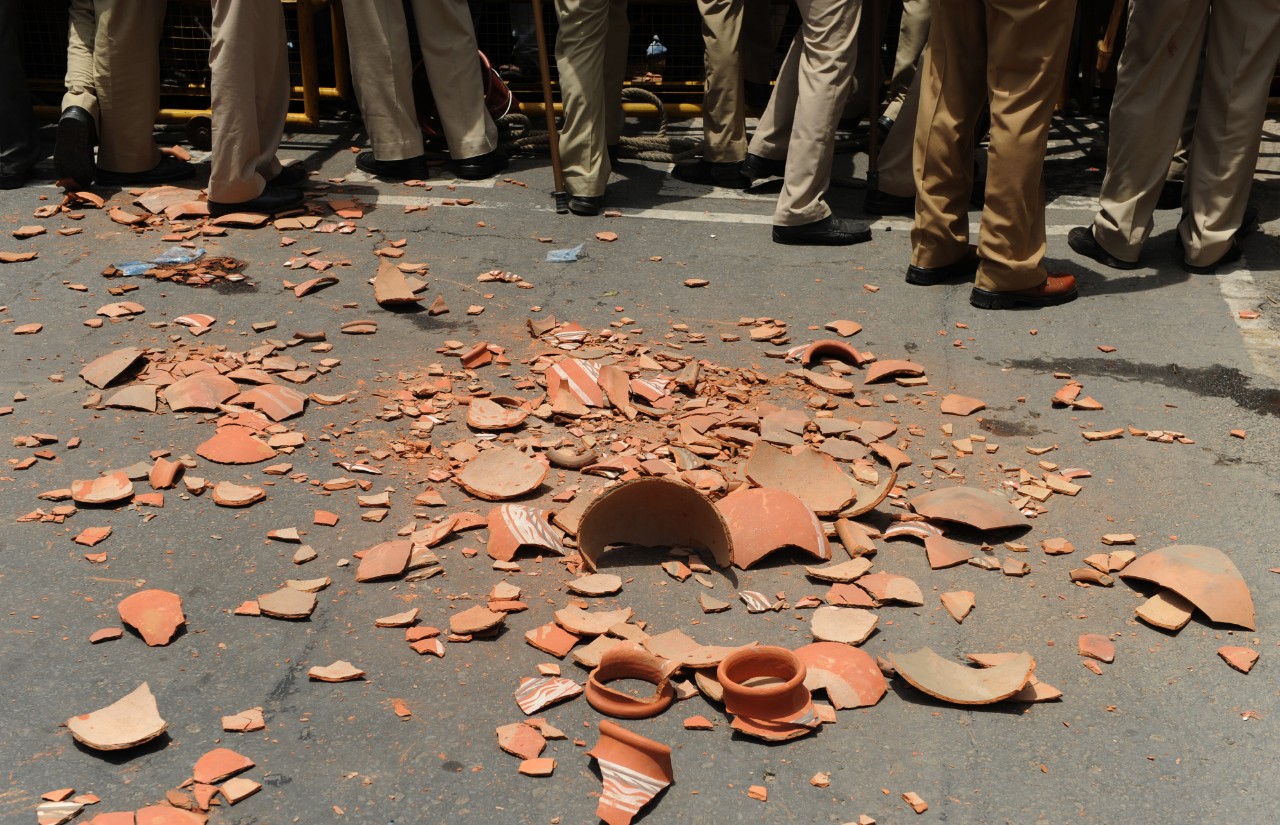 Pottery Barn: “You break it, you own it.” Photo by Sajjad Hussain / AFP / Getty Images.

The talks over Syria have gone nowhere and the radical Sunnis have spilled across the Iraqi border to threaten Baghdad. So the chorus rises again:

“Something must be done!”

“Nobody will take us seriously if we do not act.”

As we’ve seen several times before, the only action on the table is dropping explosives on the Bashar al-Assad forces in Syria and/or their brethren in Iraq. Bash Bashar, as it were.

Don’t get me wrong, I agree that Bashar al-Assad… like Saddam Hussein, like Muammar al-Gaddafi, like (fill in the blank)… is a bad actor with genocidal tendencies, by which I mean he will kill children over the beliefs of their parents. American Indians have a pretty good handle on genocide.

Brzezinski left out the third part of the fake nation that is Iraq, carved by British and French diplomats out of the remains of the defeated Ottoman Empire after WWI. The Middle East was cast into the hellish cauldron we see on the news when two diplomats, Mark Sykes for Great Britain and François Picot for France, agreed on what the borders would be after the Ottoman Empire was defeated. The Sykes-Picot borders were founded on treachery against the Arab leaders who were promised independence in return for their help in overthrowing the Ottoman Empire.

The unaccounted for stakeholders would be the Iraqi Kurds, who have mostly stood with the U.S. and therefore complicated relations with the remnant of the Ottoman Empire in Turkey, our NATO ally.

The Turks are wary of the Iraqi Kurds closing ranks with the Turkish Kurds to carve a new Kurdistan in places that involve Turkish real estate. While the worst Turkish nightmare has so far been fended off by Turkey’s control of the route to market for the oil from Iraqi Kurdistan, it remains a long term question how the U.S. can avoid screwing our Kurdish allies in Iraq without causing heartburn for our long time allies in Turkey.

The Iraqi Kurds have seized the moment.

The Iraqi Kurds have seized the moment. When the regular American-trained Iraqi army — in spite of outnumbering ISIS 30-1 and having superior equipment — turned tail, the Kurds unleashed their Peshmerga militia to seize the oil city of Kirkuk. The Kurds now control the oil fields in Northern Iraq, and while U.S. Secretary of State John Kerry got the Kurds to pay lip service to the Iraqi Constitution, the facts on the ground suggest that Kurdistan is independent in all but name. Since ISIS is as unlikely as the Iraqi army and, so far, the Turks to contest the Kurdish issue, the killing is between Sunni and Shi’a. 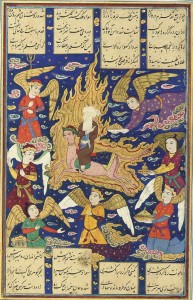 The Prophet ascends. Art from Columbia.edu.

It comes down to what former Secretary of State Colin Powell used to call “the Pottery Barn theory.” We will own what we break and we don’t want to own the Sunni and Shi’a argument.

It is, but we didn’t break it, and in the Middle East, “broken” is a relative term. Just when you think it can’t get worse, it gets worse.

Don’t we already own it?

Well, in the sense that most of our allies are Sunni scum rather than Shi’a scum. The present unpleasantness was started by Sunni scum, our nominal allies. Until ISIS was able to fund itself by robbing banks, it was funded from a veritable who’s who of Sunni states allied to the United States, either by governmental dark money or by turning a blind eye to the actions of individual sheiks. The main players appear to be Saudi Arabia, Qatar, and Kuwait. Many veterans will recall that saving the bacon, er, I mean skin, of the Emir of Kuwait was the casus belli of the first Iraq War.

If we’re all about counting votes, there are more Sunni in the world than Shi’a.

If we’re all about counting votes, there are more Sunni in the world than Shi’a (never mind that neither have access to meaningful elections).

If majority rule is the logic, then I suppose we should declare it the public policy of the U.S. to support the Sunni view that Abu Bakr and his bureaucrats were the proper successors to the Prophet rather than the Shi’a heretic Ali and his descendants, who contended that the Caliphate was hereditary in the Prophet’s family.

We might just as well send our sons and daughters to die for the cause of suppressing Ali’s heretical views in Syria, because that’s the mission, the same mission as in Iraq if it were about democracy understood as majority rule.

Can that be the case? Can it be about democracy when Saddam Hussein was an Abu Bakr guy and we installed an Ali government to naturally unite behind the tip of the Shi’a spear, Iran? The predictable outcome of “democratizing” Iraq was empowerment of Iran, a charter member of George W. Bush’s “axis of evil.”

Every fight in that region dims beside the clash between Sunni and Shi’a. Neither side of that fight gives a hoot about U.S. interests except insofar as U.S. power can be harnessed in that clash. Right now, the Sunni want the U.S. to arm the rebels in Syria while the Shi’a want us to become the Iraqi air force to hammer the same people on the other side of a fake and porous border.

When the Prophet ascended, the vast majority of his followers believed religion was inseparable from politics and the succession of power in both could be decided by force. Too many of the Prophet’s followers still believe those things today.