Rogue’s Gallery: We should all look at the presidential bullpen in constitutional order. 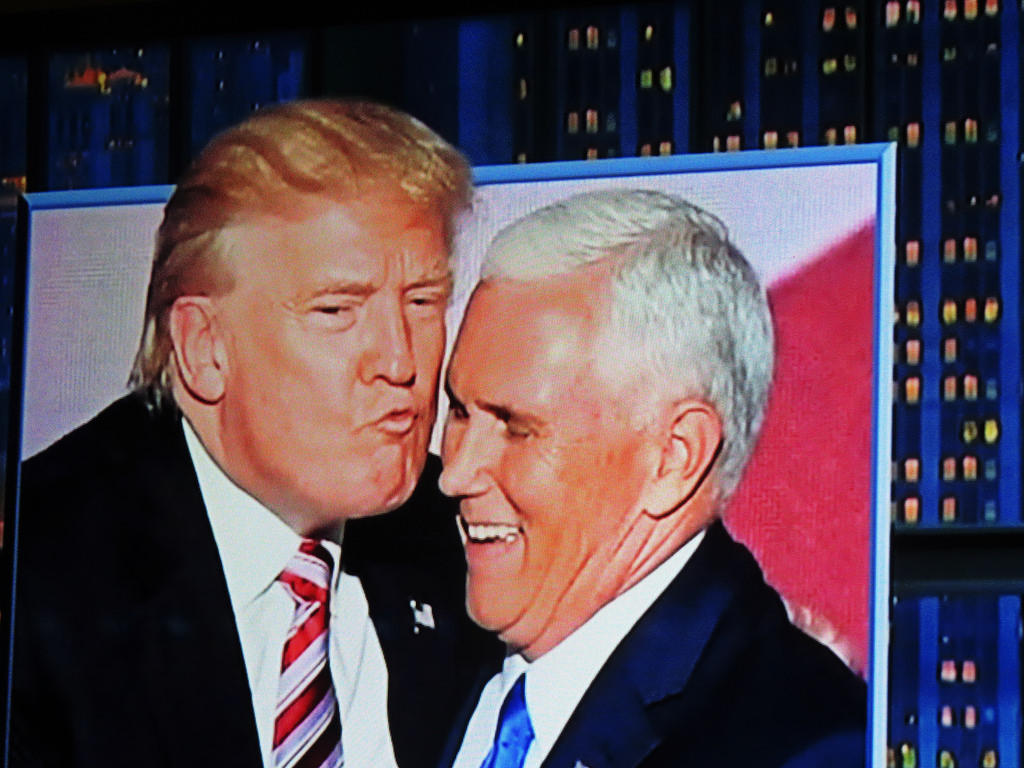 Sweethearts! Would Pence be better? Photo by Steve Baker / Flickr.

The investigations are scattered among the House, the Senate, and now a special prosecutor, and the rampant obstruction brings on periodic cases of Watergate déjà vu. It is becoming less and less likely that Donald J. Trump can keep the sticky stuff in the bottle. I think it’s probable that The Donald is guilty of impeachable offenses, but, like Watergate, it’s not so much the crime as the cover-up.

“High crimes and misdemeanors” are on their face broader than felonies, as Bill Clinton found out. In many states, Clinton’s perjury would not have been a felony because it did not touch a material issue in an official proceeding. If Congress were not dominated by Republicans, it would be possible (legal) to impeach Trump on the ground that he’s an inveterate liar in public matters who brings disrepute to the office.

If the House were to pass articles of impeachment, then the Senate would have to schedule a trial. When it gets down to the short strokes, an impeachable offense is whatever the House says it is, and conviction or not is within the discretion of the Senate. Clinton walked, but Clinton did not argue and no one claimed he was not guilty. A semen stain on a dress can only be explained in very few ways.

Given Republican dominance, mere lying will not be a ground for impeachment.

Given Republican dominance, mere lying will not be a ground for impeachment, even though Trump carries lying to a level I’ve never seen in a lifetime of watching politics.

Obstruction of justice is a ground for impeachment, and it was the first of three articles of impeachment Richard Nixon was facing when he mooted the process with his resignation. How has Trump obstructed justice? Firing the head of the FBI who was investigating him. Demanding personal loyalty from a public servant. Serial lying about the links between his campaign and a foreign power. Threatening James Comey on Twitter. Trashing the reputation of Sally Yates after firing her.

Before this is over, he may reach a Nixon trifecta — if he has not already — by hitting the other two articles of impeachment in Nixon’s case: violating the constitutional rights of citizens and failing to produce documents. The constitutional rights of citizens seem to me to include a right to service in the public interest, so that’s a gimme. He has not yet disregarded a subpoena because he has not had the opportunity. While it may take months to get to that point, I expect he will have the opportunity.

It seems probable Trump will fight any subpoenas from the special prosecutor because, so far, he’s following the Watergate playbook as if he were ignorant of recent history. I can’t believe I wrote “as if.” Trump offers evidence every day that history does not capture his attention.

In addition, an issue not present in the Nixon impeachment is all over the Trump presidency. There is no case law I know of on the meaning of Article 1, Section 9, Clause 8 of the Constitution, the Emoluments Clause. Trump is receiving so much filthy lucre from foreign states — directly and indirectly, commercial and political — that if he has not violated it then it cannot be violated.

I also think that, if impeached, he will be in danger of conviction because of his track record of pissing on everybody’s shoes. Some people fear him but few love him.

Are you sure? Maybe you should look at the bullpen in constitutional order before you answer that.

1. Vice President Mike Pence? Why not just cut out the middleman and appoint Jesus? Government by Divine Guidance is bad enough, but in Pence’s case if Jesus did not inform him then he is not informed. Did you follow his jihad against gay people as Indiana governor?

You see the problem? We are used to disputing public policy in secular terms and the Constitution did not anticipate government by Christian mullahs.

2. House Speaker Paul Ryan is reputedly smarter than Pence and is what passes for an idea man on the starboard side of U.S. politics. Problem is, his major idea is making the wealthy wealthier.

If you favor privatizing the entire social safety net and shifting the tax burden even more off the investing class and on to the working class, Ryan is your man.

I would balk at being governed by somebody who thinks Ayn Rand was a serious philosopher.

Personally, I would balk at being governed by somebody who thinks Ayn Rand was a serious philosopher. I’ve watched enough sophomores get over her to wonder about the source of Ryan’s arrested development.

3. President pro tempore of the Senate Orrin Hatch? See the Pence theory of government above except that Hatch is required to phone Salt Lake to find out Jesus’s druthers. However, Hatch has a good grasp of how government works which in itself might be an improvement even if you don’t like what he’s doing. The value of Hatch’s stock depends on how much you jones for basic competence.

6. Defense Secretary James Mattis? Military men have not done well as POTUS, with the exceptions of George Washington and Dwight Eisenhower. But I must admit it would be cool to have a POTUS nicknamed “Mad Dog.”

8. Maybe Secretary of the Interior Ryan Zinke. If I had to pick one, I think I’d take this guy from Montana. Ex-SEAL. Two Bronze Stars. Believes in science, sorta, saying that climate change is not a hoax but it’s not proven science either. But at the same time, he views climate change as a “threat multiplier,” which is pretty much the military line.

He’s anti-choice, but that does not make him stand out in this list. Unlike Trump and his Attorney General, Zinke has no problem denouncing white supremacists.

My willingness to take him seriously is a measure of my desperation.

9. Agriculture Secretary Sonny Perdue? Climate change denier. Refused to put his assets in a blind trust and violated his own executive order on not taking gifts when he was governor of Georgia.

When Georgia had a drought, he organized the whole state to pray for rain.

On the other hand, when Georgia had a drought in 2007, he organized the whole state to pray for rain. As a direct result, 2009 saw the most severe flooding in Georgia’s modern history.

10. Commerce Secretary Wilbur Ross carries the primary qualification for service in the Trump cabinet: he’s a billionaire. It was Ross and the cowboy capitalist Carl Icahn (a Trump advisor on cutting regulations, a position he has already proven lucrative) who cut the deal that kept Trump in control of three casinos on the brink of bankruptcy.

Am I the only one who wonders how a casino can go bankrupt?

Last year, Ross paid back $11.8 million to investors and paid a fine of $2.3 million to the SEC to settle claims his company was overcharging fees. Clearly qualified for higher office, no?

11. Labor Secretary Alex Acosta is one of the smartest and cleanest of Trump’s cabinet appointments. He is a graduate of Harvard Law School and a former dean of Florida International University College of Law. He has never been accused of stealing or abuse of authority.

The only explanation for Trump’s lapse of judgment in appointing a straight arrow was his crying need for a Hispanic in his cabinet. People were talking, y’know?

Trump may have relaxed the billionaire requirement because Acosta’s Cuban-American.

Trump may have relaxed the billionaire requirement because Acosta’s not Mexican-American but rather Cuban-American.

12. Health and Human Services Secretary Tom Price holds a BA and an MD from the University of Michigan. Until he started to move up in the political world, Price was a member of the Association of American Physicians and Surgeons, which is to the American Medical Association as Gun Owners of America is to the NRA. AAPS is opposed to Medicare and to mandatory vaccination.

13. Housing and Urban Development Secretary Dr. Ben Carson said he was not qualified to serve in the cabinet after running for POTUS and then he accepted a cabinet post. Any further questions?

She is a graduate of Mount Holyoke and Harvard Business School and she has an impressive resume, but she is disqualified from serving as POTUS because she was born in Taipei, Taiwan.

15. Energy Secretary Rick Perry? No pressure, but Obama’s first Secretary of Energy was Dr. Stephen Chu, Nobel Laureate in Physics. His second was Dr. Ernest Moniz, a nuclear physicist whose last accomplishment in office was his refusal to turn over to the Trumpistas a list of Department employees who worked on climate change.

Perry famously earned a D in a course at Texas A & M University called “Meats,” leading a Texas wag to suggest this snippet of a lecture:

‘This, ladies and gentlemen, is a hot dog.’

“This, ladies and gentlemen, is a hot dog — am I going too quickly for you, Mr. Perry?”

16. Education Secretary Betsy DeVos comes from the 88th richest family in the U.S. according to Forbes and she has reversed the Obama administration’s crackdown on diploma mills like Trump University. She was confirmed when VP Pence cast a tie-breaking vote. It was so close because she’s a woman ahead of her time, an education secretary hostile to public education.

17. Veteran Affairs Secretary Dr. David Shulkin is the only appointee to the Trump cabinet confirmed on a vote of 100 to zip. He’s the first non-veteran to head the VA, but he’s also highly qualified, having headed hospitals and hospital organizations.

He considers veteran suicide a “top priority” and what really makes him the odd man out in this rogue’s gallery is his opposition to privatizing the VA, on the ground that it’s “a different model of medical care.” Shulkin would be a bad pick for POTUS because we need him exactly where he is.

18. Homeland Security Secretary John Kelly clocks in dead last in the constitutional order of succession. His work as commanding officer of the Southern Command, which takes in Central and South America, won bipartisan praise. For those who — unlike President Trump — have a working knowledge of U.S. history, Kelly is more George C. Marshall than Douglas McArthur.

As for the poor track record of generals in the White House, I expect that if we got down to number 18 on the list, it might be a good time for a Marine Corps general.

Now, one last time, are you really sure impeaching Trump is a good idea?

[Steve Russell lives in Sun City, Texas, near Austin. He is a Texas trial court judge by assignment and associate professor emeritus of criminal justice at Indiana University-Bloomington. Russell, who belongs to the Cherokee Nation of Oklahoma, is also a columnist for Indian Country Today Media Network. Steve was an activist in Austin in the sixties and seventies, and wrote for Austin’s underground paper, The Rag. He can be reached at swrussel@indiana.edu. ]

5 Responses to Steve Russell :
The downside to impeaching Trump