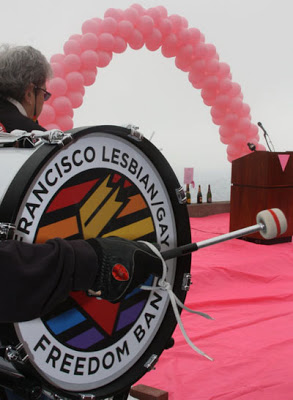 After more than 40 years of business as usual, will the NEA be able to perpetuate its Eurocentric and anti-LGBT biases under a mixed-race President?

SAN FRANCISCO — The National Endowment for the Arts will receive $50 million as part of the American Recovery and Reinvestment Act of 2009 signed by President Obama on Feb. 17, 2009. Since the Robert Mapplethorpe controversy almost 20 years ago, the NEA has refused to fund out-of–the-closet LGBT (Lesbian, Gay, Bisexual and Transgender) arts organizations. The agency’s recently released eligibility requirements for Stimulus funding ensure that the NEA’s ongoing censorship of LGBT arts groups will continue: they exclude organizations that have not been funded by NEA during the past four years.

Since the Bush administration’s NEA did not fund LGBT arts groups and only paid lip-service to diversity, most Stimulus-funded grants are expected to be funneled to the nation’s symphonies, operas and ballets (the SOBs); these groups already receive the lion’s share of government arts funds and serve almost exclusively affluent white audiences.

While the NEA’s failure to financially support the nation’s cultural diversity stretches back to its founding during the LBJ era, the agency’s anti-LGBT zeal hit its zenith during the Clinton administration, when his appointee—Jane Alexander—personally censored every LGBT grant recommended for funding by the agency’s peer panelists. The NEA’s largest grant program “Access to Artistic Excellence” illustrates the agency’s overall Eurocentric and anti-LGBT bias: in the last two rounds of funding, this NEA category awarded 1479 grants worth more than $34,000,000, but less than 10% were awarded to arts groups rooted in communities of color and not a single grant was awarded to an out-of-the-closet LGBT arts organization.

After more than 40 years of business as usual, will the NEA be able to perpetuate its Eurocentric and anti-LGBT biases under a mixed-race President? Will the NEA’s blatantly discriminatory policies be challenged along with Don’t Ask Don’t Tell? Will the NEA continue to spend millions of dollars funding Madame Butterfly instead of supporting the hundreds of community-based arts projects taking place across the country that promote social justice? More soon on this developing story.